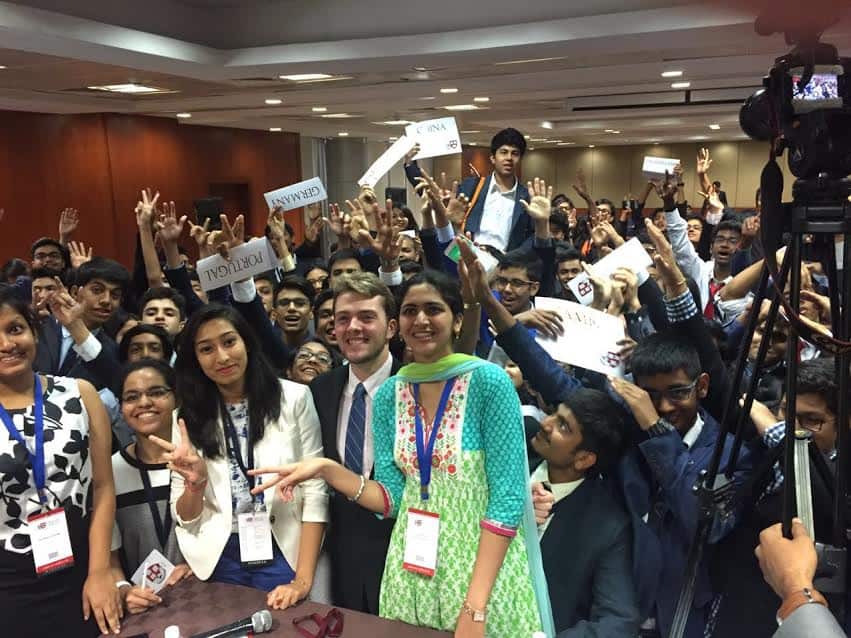 Not cool enough for GAs, not clever enough for crisis. I've traveled with All-American to NAIMUN, WEMUN Expo, and HMUN India, and serve as the Alumni Associate for the Midwest.


The end of the third day of HMUN India was nearing. My committee, the 130th Session of the International Olympic Committee, made up of an amalgamation of over 150 students from around South and Southeast Asia (and myself, the lone American delegate) had spent the last three days in intense debate over the future of the Olympic Movement. It was up to us not only to decide the goals of the Olympics for years to come regarding the issues of urban sustainability, the politicization of the Olympics, and reforming the bid process, but we were also given the task of selecting the Host City for the 2024 Olympics. My bloc and I were feeling very apprehensive — we knew our presentation for the city of Lisbon, Portugal went well, but the city of Buenos Aires, Argentina was popular with delegates from underdeveloped nations and those in the back of the room, and that we were missing a section of votes after some of my (Canada’s) allies had broken away to create their own presentation of the city of Los Angeles, California. We had our work cut out for us, running to the delegates with whom we had previously worked with to write resolutions, trying to shore up as much support for our proposal as we could. Moments before we voted, the Chair demanded that we take a break. The delegate of Iran and I during a much-needed break.

To be fair, the day had been non-stop, and I was severely in need of a few moments to catch my breath. The Indian delegates were some of the hardest workers I had ever met — as late as midnight my bloc’s group chat was still being flooded with messages about what time we would meet in the morning, about what Candidate City bid we were supporting, about whether or not our resolution would pass. The night before, we were up just as late writing out the working paper. The in-committee experience had been no different. Delegates were all adept public speakers, eager to take the mic and share their country’s viewpoints. In my committee of 150, anywhere between 60-70 (maybe even more!) delegates raised their placards each time the chair asked for speakers. I made no more than five speeches the entire weekend. To this day, I have never been in a committee where so many people were actively involved and seeking to be engaged in the debate experience. Normally, in the United States, up to half of the committee becomes unresponsive by the end of the conference — they are on the back of their phones, pass funny notes, or leave to grab coffee with their new friends. There was none of this at HMUN India. Even if delegates were not participating, they were still listening and learning. Each moment was something to be taken seriously. Some of my bloc-mates and I goofing around at the Dias.

This break the chair had gifted us was a much-appreciated moment of levity; even the most competitive of us were worn out from the long committee sessions of some of the most substantively-advanced debate in which I had taken part (these delegates were not afraid to incorporate complex economic and scientific principles into their solutions and were even less afraid to tear down opposing resolutions with less subtlety than a paper shredder). We all took the time to get to know each other a little better, to talk to one another. I asked them about their experiences doing Model UN in India, and they went on about how MUN is typically structured in their respective regions. I learned that in India, Model UN is typically viewed as something more akin to a debate competition; while delegates in American-style conferences are generally encouraged to be as decorous as possible to each other, being careful not to insult or overtly criticize other’s opinions without at least a filter of politeness, the Indian system has several mechanisms in place that encourage more spirited back-and-forth. These include Points of Information, a point delegates can raise to correct the factual inaccuracies of other delegates, and the ability to ask follow-up questions, which gives delegates the ability to debate one-on-one with each other for expanded stretches of time.

Definitely one of the nicest placard signings of my MUN career.

The Indian delegates seemed disenchanted when they heard about the American method of doing things — the style of parliamentary procedure that HMUN India runs — that our focus was on collaboration and diplomacy, rather than on insistently proving that your own ideas and stances were the superior ones. They told me that they found this style boring, that they missed the back-and-forth, that they believed that the American method was based on who was the best at standing on chairs and yelling at the top of their lungs. But these same delegates were the ones who came up to me and told me that they really liked working with me, that they loved working with the kids on the All-American Team, that they had worked with them in the past and found them to not only be good thinkers, but good collaborators, and good leaders. They told me that I was one of the only delegates they had met that stuck to commitments made in the merger process, that encouraged other delegates to talk instead of talking over them. Even those delegates from opposing blocs who had vehemently criticized my draft resolution during for-and-against periods still came up to me and said it was one of the best they had ever read. The Chair called us back to order to begin voting on the Host City. Johannesburg, South Africa was the first to go, and then Los Angeles was taken out of the running. The final tally, done through roll call, went back and forth between swatches of delegates, but in the end, Lisbon, Portugal proved victorious. I believe this is something ingrained into not only the American value set professed through Model UN, but the All-American method of teaching these ideals: I have always been told that the Number One Rule of MUN is to be a decent person. Doing Model UN in India taught me that this skill set — diplomacy, collaborative leadership, charisma, kindness — is something that is cherished in MUN systems all over the world. It is easier to tear down the work of others than it is to get others to follow you, and through my “Americanized” debate strategy and performance, I was able to escape with more than an Outstanding Delegate award; I was able to make new friends from all around the world. And isn’t this spirit of international collaboration and communication what Model UN is all about? The All-American delegation after closing ceremonies.