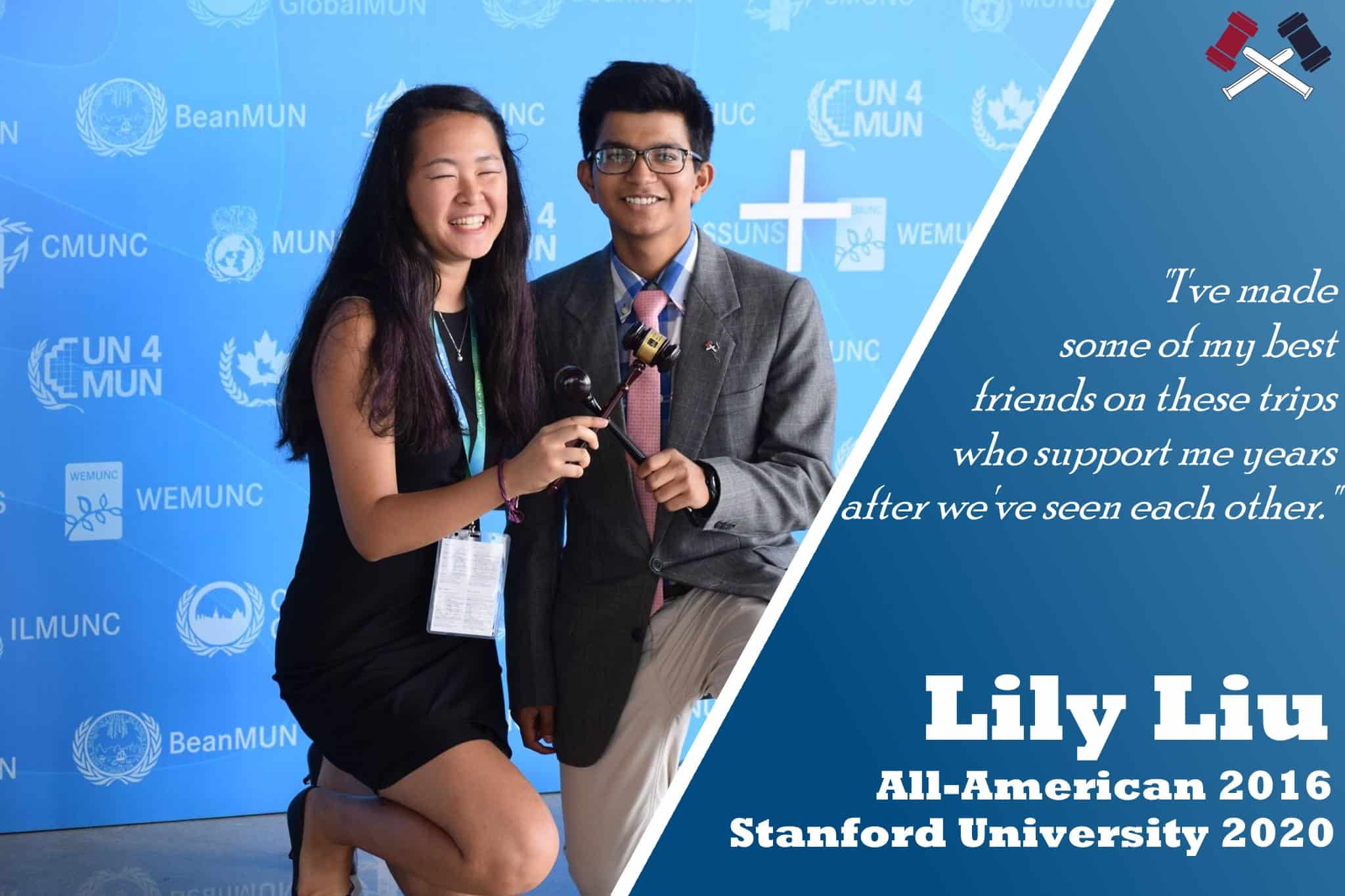 Lily Liu, a current freshman at Stanford University, was a principal member of the All American Model United Nations program during her time in high school. Lily attended both the WEMUN Expo in Beijing, China and NAIMUN, hosted by Georgetown, winning a gavel and a verbal commendation, respectively. Lily posing with her favorite members of the 2016 All-American Model UN team in Beijing, China

Lily has been actively competing in Model United Nations for six years, both in China and the United States. During her Freshman and Sophomore years at Loomis Chaffee, she wasn’t as involved with Model United Nations as she wished she had been. It wasn’t until her junior year of high school that she dove into what she described as ‘the wonderful, life-changing world of Model UN.” It was shortly after she resolved to dedicate herself for entirely to MUN that she decided to apply to the All-American Model United Nations program with the help of a friend who had been a member of the WEMUN team a year prior.

“I made some of my best friends on these trips who support me years after we’ve even seen each other. These are people who continually comfort me at my lowest points and celebrate with me at my highest.”

As a native Chinese speaker who moved to the United States to attend The Loomis Chaffee School in 2013, Lily had a unique experience traveling with the All-American WEMUN team in 2016. When asked about touring her home city with a group of outsiders Lily said that she “didn’t expect the tour to be as enlightening as it was.” She continued to say that “touring with a group of Americans shed light on a lot of things I never saw or paid much attention to when I lived there.” She joked saying that, “Frank even knew more about the Temple of Heaven than I did.”

When asked to reflect upon her experience with the All American Model UN team Lily said, “I made some of my best friends on these trips who support me years after we’ve even seen each other. These are people who continually comfort me at my lowest points and celebrate with me at my highest.” The conference had a particularly large impact on Lily as she used to compete against eloquent Americans as a Chinese delegate. She felt that she had completed a “Circle of life.” and was honored to be able to help and support those who reminded her so much of her younger self. Lily expanded on her point by delving into what Model UN as a whole means to her, saying that her favorite part is “the human aspect of learning how to work with different types of people, diverse opinions and objectives, and rooms full of ambitious and intelligent delegates.” She concluded by saying, “Model UN has exposed me to global issues that I would never have thought about and deeply influenced what I have chosen to do with the rest of my life.”

At Stanford University, Lily plans on double majoring in International Relations and Public Policy, with a minor in Computer Science. She hopes to work in Cybersecurity and information warfare while researching the intersection of policy and technology- all ideas initially introduced to her in Model UN. Lily has continued her Model United Nations career, recently getting elected to be the Secretary-General of Stanford Model United Nations Conference (SMUNC) 2018. She continues to chair for Montessori Model UN, the same middle-school Model UN program in which she competed as an eighth grader. Outside of Model UN and her Stanford classes, Lily is heavily involved in an Alternative Rock Acappella Group on campus, called the Stanford Harmonics. Lily commented on the Stanford student body as a whole saying that, “Everyone here is so talented, they inspire me to do better.”