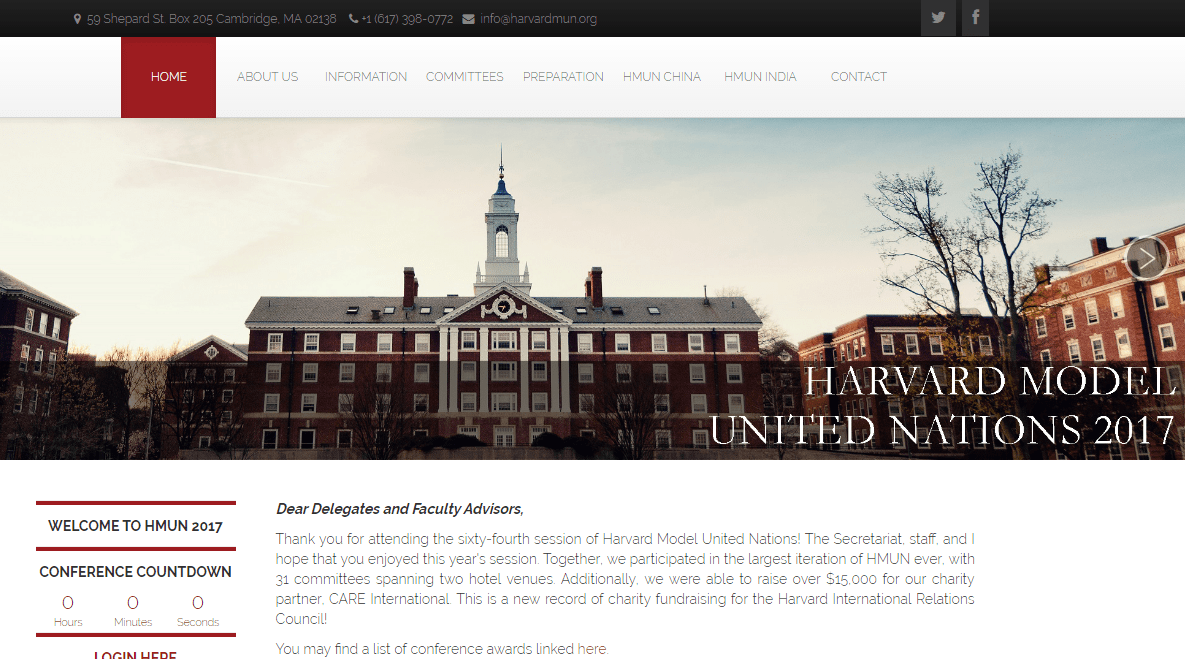 We find ourselves in the heart of Model UN season once again. This past weekend, two major US conferences took place in Boston and Philadelphia, homes of Harvard Model UN and the Ivy League Model United Nations Conference, respectively.

I had the chance to review the HMUN Awards list from this year, and it had a few interesting takeaways. (I would love to see more transparency from Penn, but ILMUNC refuses to publicly release its awards lists.)

To the best of my knowledge, HMUN 2017 had the largest representation from the international community over the past ten years. It’s clear that the HMUN secretariat has found their groove recruiting schools from China, South Asia, and Latin America. I think this gives HMUN an added benefit of international exposure many US conferences lack.

What’s also clear is that the international schools did not come to simply observe. Of the approximately 150 individual awards, 58 went to students from international schools, over 38% of the total awards given out. Upper Canada College led the way with 10 individual awards on the way to winning Best International Delegation. Academia Merici (Venezuela), Colegio San Ignacio de Loyola (Puerto Rico), École Jeannine Manuel (France), and The Cathedral and John Cannon School (India) all had noticeable performances as well.

All Roads Still Go Through the Ultra-Competitive Schools

As a strong proponent of the award system in Model UN, it’s still not hard to understand why so many people are turning away from awards in Model UN when you see numbers like this. When three schools dominate one of the largest conferences in the US, closing ceremony can become bleak and miserable, sans three delegations from ultra-competitive, ultra-elite private schools. I continue to contend that the solution is strengthening programs in other schools around the country, but that’s an argument for a different day.

To me, this is a positive sign. All it takes is one or two dedicated students for a school program to turn around in short time. The more schools winning at least one award, the better the future of Model UN in the US will be.

I’m always most excited to work with students who want to improve their Model UN skills because they know they can do better. Study with me and the All-American Community this summer at our Diplomacy Academy or apply for one of our international travel teams to Beijing, China or Hyderabad, India, and you’ll learn how to be a stronger Model UN delegate, a better student, and a more powerful advocate. Email me with any questions at [email protected]. Scholarships and financial assistance available.