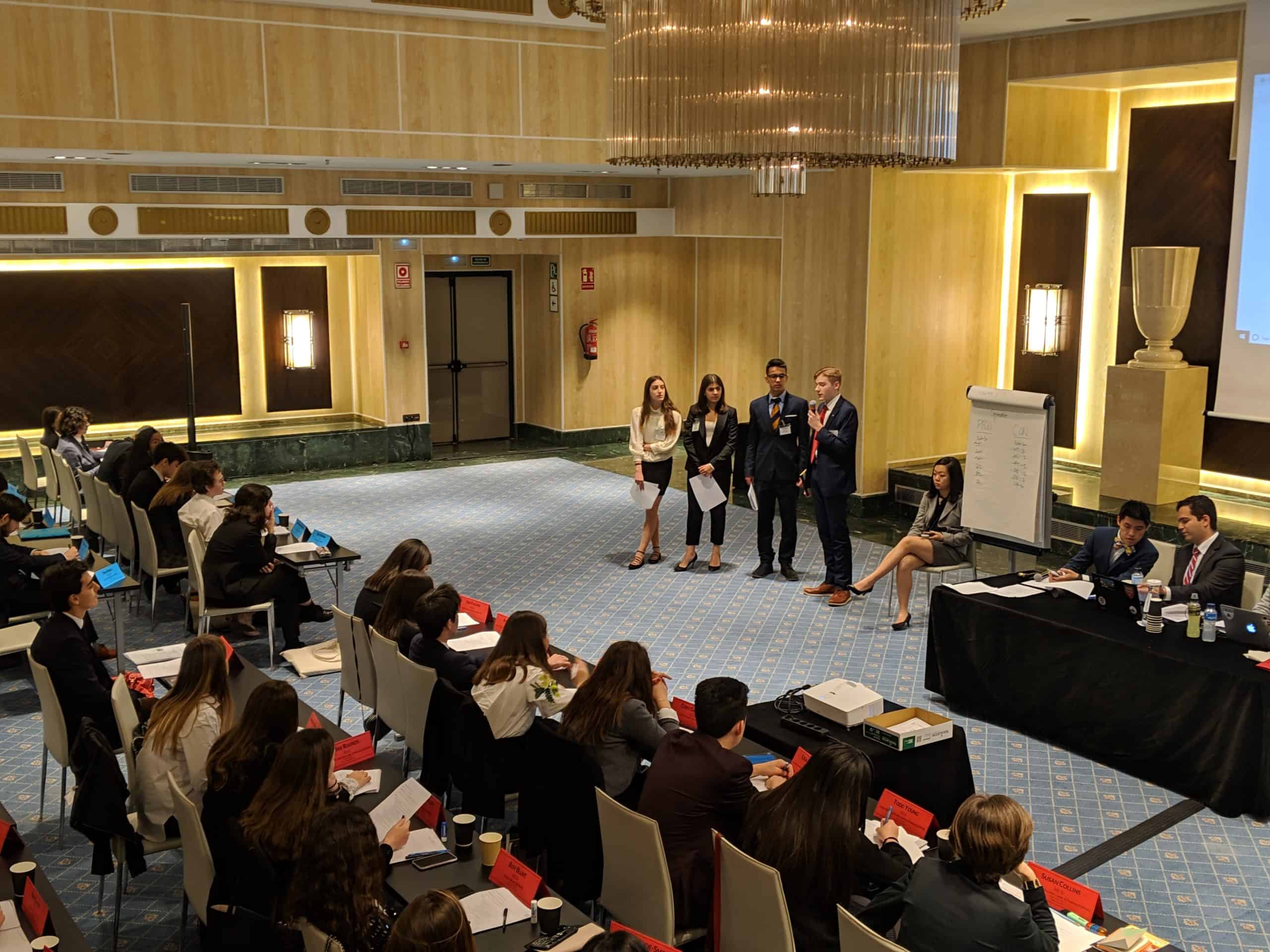 Let’s get one thing straight: nothing could have prepared me for my first collegiate Model UN conference. The successes of my high school Model UN career, extensive committee experience, and general knowledge of foreign policy were all rendered practically useless once I entered that first committee session. For anyone entering the world of collegiate Model UN, admitting this helplessness is a critical first step.

Entering your first college conference with a sense of arrogance will end in disaster. Period.

This is because a successful transition from high school to collegiate Model UN is crucial to the longevity (and success) of your undergraduate career. This isn’t high school anymore: the upperclassman competitors will not hesitate to remind you of that.

My first collegiate conference was the 2020 Columbia Collegiate Model United Nations Conference (otherwise known as CMUNNY). I was cautiously optimistic when I arrived at this conference. As the two-time Secretary General of my high school club, a member of the All-American international travel team, and recipient of many competitive awards (including numerous gavels), I was fairly confident. After all, I had the tools to snag a gavel, didn’t I? I researched for weeks coming up to the conference on my topic of debate, the 1979 Iranian Revolution, and came strapped with information to use as ammo in my speeches. Little did I know what was to come. In the moment of that first gavel bang signifying the beginning of debate, I was astonished at the environment that surrounded me. I quickly realized several cold truths at the end of that weekend. It was a rude awakening, to say the least.

Columbia’s collegiate conference is the first event to be considered in the North American Collegiate Team Rankings for Model UN, and this fact is reflected in the makeup of all committee’s at the conference. Only the most experienced, eldest, and achieved students were allowed to represent their teams at this tournament. I was surrounded by countless head delegates and Secretary Generals from some of the most competitive teams on the circuit, ranging from Harvard, George Washington University, University of Southern California, Yale, to Florida International University. Even students who were not in leadership positions were carefully and comprehensively assessed for their potential to succeed and attain an award through multiple tryouts prior to the conference.

At collegiate Model UN conferences, everybody is somebody.

In high school, there are delegates who are just there to boost their college applications. In college, everybody wants to be there: everybody cares.

This weeds out the common delegates we see in high school conferences that refrain from participating a significant amount or do low levels of research in preparation.

While CMUNNY is usually among the most competitive conferences of the year, this level of fierce competition, rivalry, and experience is present at every conference that is included in the rankings.

Competition Unlike Anything You’ve Ever Seen

In high school, I attended some of the most prestigious, competitive conferences on the market. Nothing I ever witnessed–even at Harvard’s conference–could compare to what college Model UN is like, in terms of competition.

It was at the point where it was completely impossible to differentiate the Best Delegate from a Verbal Mention. Every delegate had their placard raised at all times, sent in countless crisis notes per hour, and frequently took jabs at the other delegates in order to advance their own ideas and take leadership of the committee. Committee never lulls: it’s a bloodbath from start to finish.

There are two reasons for this intensity of competition. First, the students are just generally more educated, which heightens the level of debate. Many students in collegiate Model UN are studying International Relations, Political Science, International Economy, or related fields. That means their solutions, their clauses, and their understanding of the topic are infinitely more nuanced than that of a high school student. Specialized education breeds depth of knowledge.

The second reason is the creation of the North American Collegiate Rankings. These rankings place universities in a numerically ranked system (which begins at the commencement of each academic year) based on the summation of Delegation and Delegate awards they received. The result is an extra sense of rivalry which plays into school spirit. Colleges brag about these rankings and consider it a point of necessity in order to garner more travel money to compete at more conferences. It is a cycle of competition, team funding, and school rivalry that manifests itself in all corners of the circuit. Chances are if your club is not in the top 15 of the rankings, many delegates will not recognize your university. Tough blow.

Now, you might be wondering how this information might possibly aid you. This is not an attempt to lower your self-esteem in regards to your committee performance, but to preface you with the hard truths I learned as a college freshman. Rarely do delegates place at their first 1-2 collegiate conferences.

What can you do to bolster your chances? First, you should consider changing your mindset. Too often, competitive delegates who are used to placing in conferences focus too much on micro-strategies, all aimed towards a gavel. We are used to spending more time worrying about the closing ceremony, rather than our love and appreciation for foreign affairs. We speak out in committee about topics from the perspective of competition, rather than a genuine debate about the merits and falls of the topic. This results in a fall of committee performance if we are surrounded by too many excellent and competitive delegates.

If the quality of your participation is contingent upon the feeling of beating other delegates, then you’ll feel lost in a collegiate conference.

Frankly, people are just too good for that mentality to work in college. You will feel constantly challenged. It’s inevitable.

Therefore, your confidence in the committee must come from a place of internal passion and love for the subject matter. When you resort back to the initial passion which drove you to Model UN in the first place, you will begin to function and speak at a higher level than you may have before. Your competitive edge will come naturally, free from the anxiety that many of us held during high school.

But, even so, I witnessed head delegates fail to place in front of their team. The fact of the matter is that the sheer amount of talent held in the collegiate circuit will mean that you will never be guaranteed an award.

Let me say that again: I don’t care how many gavels you won in high school. In college, you are never guaranteed an award.

It does not matter how much work or time you put into it. There could always be a delegate in your committee whose major concentration is specifically curated to the topic of debate. There could be a delegate from the U.S. Military Academy at West Point in your committee–which happens to be a war cabinet–whose understanding of military jargon makes them practically unbeatable.

Ultimately, when the level of competition is that high, you must find internal motivation to stay engaged. If your only reason to participate in committee is the prospect of a gavel, then collegiate Model UN may not be for you.

But, if the intensity intrigues you, and the heightened quality of debate peaks your interest in the subject matter, then I challenge you to lean into the chaos of it all. Learn from your peers, and survey the environment while taking notes (if it helps). Take a step back in committee, and breath.

No matter how intimidated you might be your first collegiate conference, think about the feeling you got when you first discovered Model UN. Your long-standing passion for foreign affairs and will comfort you when you least expect it. Trust the process.

Related Article: What I Miss About High School Model UN as a College Delegate