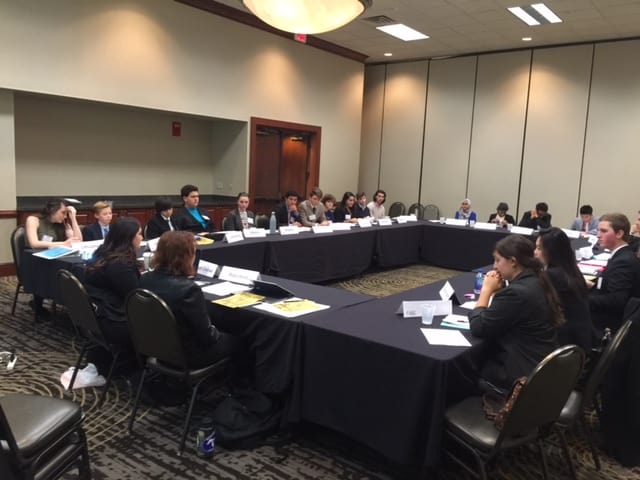 The First Twenty Minutes of Committee

The First Twenty Minutes of Committee

I’ll admit it—walking into a committee for the first time can be genuinely scary, even for the experienced delegate. Between hearing people use obscure United Nations acronyms without explanation and quoting sub-clauses of General Assembly Resolutions passed in 1968, it seems as though being prepared for anything at anytime is absolutely crucial.

It was after several conferences that I learned a secret about MUN that changed my mentality about what actions must be taken when walking into a committee: the first 20 minutes of a conference can determine the outcome. It is during these precious moments at the start that so much more than one might think happens in a committee.

The first few minutes of a committee session are not largely important because delegates are only informally introducing themselves, right? Wrong. Be early to your committee session. This is an important time to meet all delegates in the room, and not just the ones that you might be interested in working with. The more people you meet, the more potential allies you can have later. Eager delegates will go right into talking about their country’s policy, which is a smart move, but avoid getting too deep in discussion about the topic with only a few delegates. Once you join the speakers list, you do not want to feel as though you have nothing to say to the rest of the committee.

What about that group of delegates in the back corner of the room who seem uninterested? Now is the time for you to approach them and introduce yourself. If they seem particularly unenthusiastic about ‘this whole diplomacy thing’, don’t immediately rattle off your country’s position on the topic or the latest news on António Guterres. Keep in mind that not all delegates are as passionate for MUN as you may be! But, even if they’re not, they can still be your allies and vote for your resolution even if they don’t seem interested in the topic. Networking is key.

Body language is also important to observe during these initial minutes. Generally, how comfortable are the delegates in the room? The strength of a person’s handshake is known as being a way to assess their confidence and dependability. When you talk to a delegate, how is this delegate’s posture? What about their other non-verbal gestures?

Studies have shown that mirroring body language with someone else is an indication of bonding and connection. Remember that doing this mirroring can be useful in these minutes or during un-moderated caucuses in the committee.

Create a strategic game plan as soon as the speakers list is open. Once you’ve been added to the list, start sending notes to the people you introduced yourself to and ask about their positions. If you’re not first on the speaker’s list, listen carefully to what delegates say at this time to find more allies–or opposition for that matter–and make sure to write down a couple notes about what they are saying.

This is also the time when you must differentiate between dedicated delegates, and ones who will only try for the first couple of hours and then give up. It is a horrible feeling to ally with someone only to find out that they have completely stopped participating mid-conference. Allying with a diversity of people will substantially reduce this risk, and so will creating many allies- not just one or two.

Equally importantly, observe which delegates are passing notes to each other. Note: This does not mean to read people’s notes! However, knowing other people’s allies is just as important as knowing your own, as this will set the scene for forming blocs so notice which delegates are receiving attention and from whom. There is a good chance that you will become the bloc leader if you take the initiative and create the bloc yourself.

Quickly, delegates will start proposing clauses for resolutions. Be ahead of the curve and start as soon as possible even if it means writing a few operative clauses on an old Starbucks napkin. Even if you don’t think that they will make it into a resolution, it is good to send some ideas to your allies to get their general opinions because it prompts debate, and that will fuel the committee and promote discussion for the rest of the conference.

To establish yourself as a leader in committee, you have to act quickly to show others your ideas are worth following. At a Model UN conference, ideas and solutions are expressed in clauses, so make sure to over-emphasize your writing during your preparation.

I’d love to hear your tips, suggestions, questions, and feedback. Feel free to contact Juliette Raymond at [email protected], via LinkedIn at https://www.linkedin.com/in/julietteraymondmi, or follow her MUN Portal profile to be alerted of her future articles!