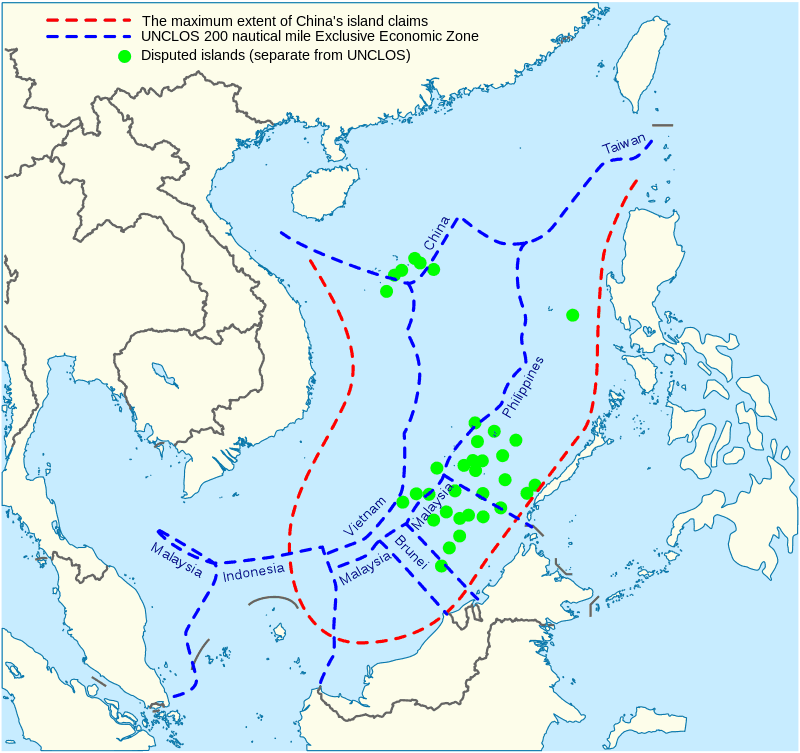 Territorial claims to the South China Sea between the nine states that enclose its area make it a potential conflict zone, with each sovereign state maintaining claims over continental shelves, islands, and exclusive economic zones.  China, the Philippines, Vietnam, Indonesia, Malaysia, and Brunei all openly lay overlapping claims to certain areas of the waters.

The strategic importance of the South China Sea is driven by the markets.  Two archipelagos occupy the key locations for the fishing industry; there is suspected crude oil and natural gas reservoirs; and the control of important shipping lanes are all waiting to be exploited by whomever successfully lays claim to the waters.

The countries involved in the disputes share a history of hostile encounters, and possible use of military in the South China Sea leads intensifies an already delicate situation.

At the end of the Second World War, ownership of the Spratly Islands came into question.  This group of hundreds of small islands and islets have outstanding fishing and may have drillable oil and natural gas reserves. As such, China sought to reclaim the whole of the islands from Japan, which occupied them during the War.  With the assistance of the United States and in accordance with the Cairo and Potsdam Declarations, China established military garrisons and redrew maps to show the islands within their territory.

The United States also made a strive to ensure the Philippines did not enter the conflict because the Spratly Islands were not a part of the original agreement between Spain and the United States.

When the nationalists were driven from China by the People’s Liberation Army, they withdrew from the garrisons established on the Spratly Islands to Taiwan.  The North Vietnamese government formally accepted that the islands were historically Chinese territory, and the PLA established a new Chinese military formation on the islands.  At the same time, South Vietnam reopened an abandoned French military base on the islands and claimed both the Spratlys and the Paracel archipelago as annexed territories.

Vietnam disputed the claim by China for sovereignty over the islands and since the 1970s has been building structures that have brought about conflict between the two countries.  The Philippines, Malaysia, Brunei and Indonesia would all later claim certain parts of the islands as well.

The 1970s brought about further involvement by the Philippines.  While the Philippines maintained a policy of not claiming the islands, President Ferdinand Marcos announced claims over adjacent islands when Taiwanese troops engaged with a Philippine fishing boat.  Further, China would go to war with South Vietnam in the Battle of the Paracel Islands, leading to South Vietnam being ousted from the Crescent Group the the Islands.  North Vietnam would later reverse their policy of defending China’s territorial claims to the islands by outlining their own claims to the islands.

In the late 1980s, China once again defeated the Vietnamese during the Johnson South Reef Skirmish.  UNESCO commissioned the Chinese to establish an observation post on the islands claimed by Vietnam.  At this point, Deng Xiaoping saw only two tracks to establish peace in the island chain.  The first, “to use force to get the islands back,” the second was to “co-develop the place.”

Read:  The Chinese Grand Strategy for the South China Sea

In 1997, China officially reaffirmed the entire South China Sea as their own.  The Philippines and Malaysia then challenged Chinese sovereignty, and Taiwan issued a statement saying that the Spratly Islands were Taiwanese territory.  Taiwan and China cooperate with each other during international negotiation as they both claim the same islands.  To further complicate matters, the Philippine Navy landed a ship on a Chinese claimed shoal and has maintained occupation of the shoal since 1999.

At the turn of the century, the United States found itself more involved in the island dispute.  The Hainan Island Incident caused a diplomatic conflict over the cause of a collision between a Chinese jet aircraft and an American surveillance plane.  The Pentagon later reported that five Chinese ships aggressively maneuvered around and followed the USNS Impeccable, a surveillance ship running “routine operations in international waters.”

In the past decade, the Philippines, Cambodia, China, Malaysia, Vietnam, Taiwan, the United States, and even India were all involved in various diplomatic, military, and press conflicts over the islands.

The United Nations Convention on the Law of the Sea has become a defining piece of legislation has become a more defining piece of how each country interprets its claims over the islands.  For example, when China turns reefs into artificial islands, the United States will not recognize that island as an extension of Chinese international waters.

The Paracel Islands and the Spratly Islands are major points of contention among governments in the South China Sea.

The UNCLOS Exclusive Economic Zone has all but been ignored by many states in the South China Sea.

All of the states present in the Special Summit on the South China Sea have competing territorial and economic claims, with the exception of the United States. For the purposes of the simulation, the United States is participating because of its military presence in the Philippines, its naval patrols of the South China Sea, and because of its military assistance to Taiwan, which is not present because of objections from the People’s Republic of China.

Read:  Modern Claims and Disputes in the South China Sea

This SSSCS will operate as a specialized committee, using a formal procedure that would be sure to govern such an international meeting. The goal of the committee is to produce an internationally binding accord to lessen tensions in the South China Sea; however, the simulation may find agreeing to such a document may not be possible– this would not be considered a failure of the committee.

The innovation in this committee surrounds the use of “Triple Delegates.” Each country represented has agreed to bring three delegates: the Head of the Delegation, an Economic Attaché, and a Military Attaché. Like most high level international meetings, only one person per delegation may engage in formal debate at a time. This gives one representative the chance to caucus with his or her peers informally and the third the chance to research, write, and support the “first chair,” the delegate participating in formal debate. Time has already been allotted to give each delegate equal speaking time.

Awards will be given to country delegations for policy accuracy, policy uniformity, committee engagement, and diplomacy. Therefore, it is crucial you see your co-delegates as allies and not adversaries.

Having already given up claims to the South China Sea, the government of Cambodia will be played by the chair to give more authenticity to the simulation.