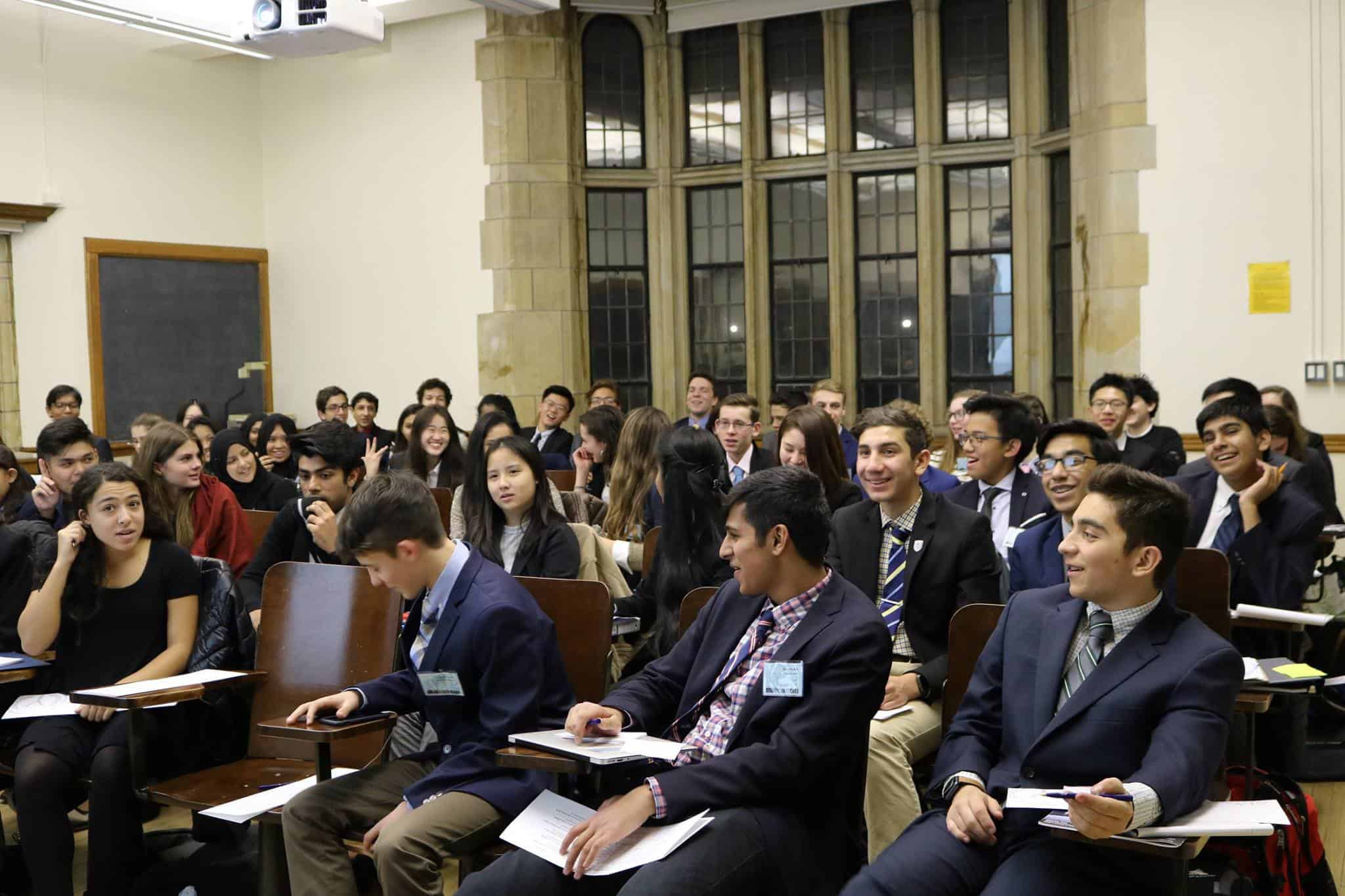 Overdoing It: The Danger of Becoming a Model UN Try-Hard and How To Avoid It

Overdoing It: The Danger of Becoming a Model UN Try-Hard and How To Avoid It

Great. It’s that kid again: tailored suit, slicked-back hair, candy-cane striped bowtie. As the clacking of his Oxfords brings him closer to your bloc’s circle, you can already feel your head throbbing. Nudging his head through Norway and Eswatini, your ears turn his otherwise normal voice into a high-pitched siren. Whether he’s rambling off about the importance of ‘collaboration’ or regurgitating some line asking for working paper signatures, you lost interest the moment you saw him walk in. Frankly, it wasn’t any one specific thing he did wrong. He’s an average speaker, and a seemingly friendly-enough kid. Heck, you even considered his anti-corruption plan relatively well put-together. He isn’t arguing with you. He isn’t looking at you funny.

So what gives? Why does everyone seem to roll their eyes as soon as he opens his mouth? What is his fatal flaw?

What gives is the kid is a try-hard. No, not a power delegate; at All-American Model United Nations, we like to define power delegates as someone who will “prioritize personal gain over committee’s effectiveness as a whole.” The guy hasn’t been shutting down inexperienced delegates, he hasn’t come with pre-prepared materials, he isn’t even ‘devilishly’ charismatic. He genuinely seems to care. Unfortunately, he’s suffering from a terrible case of overdoing it. Symptoms include: tacky attire, cliché tactics, and diligence bordering on obsessiveness.

Well, what’s the cure? Essentially, it is all about self-awareness. Recognizing your faults and accepting them is the first step to any change. The next is taking real action and implementing positive change which addresses an overbearing attitude. Consider a holistic view of your Model UN persona: our outward appearance, your research, and your attitude. It’s necessary to really look at yourself and ask: how can I start treating Model UN like a learning experience instead of (or as well as) a competition?

So, if you find yourself working hard at every conference you attend, but consistently end up dismissed by your fellow delegates and placing in the ‘Honorable Mention’ range, here are a few tips to rid yourself of that try-hard energy:

Seriously. Take a look in the mirror. All fashion-related articles on Model UN aesthetic will conflict with one another. One says to dress conservatively, the other says to dress expressively. One says ‘skip the Brazilian flag lapel pin!’ the other says ‘put on some flair, be exciting!’ While some details rest in consensus—wear Western Business Attire, avoid attention-grabbing colors (neon, pastels)—fashion is an art, and art is subjective. No one article will tell you the full story, and it is up to you to decide on the ultimate look as it pertains to your personality and Model UN persona.

This isn’t a fashion article. But when it comes to Model UN try-hards, it’s easy to draw a crude caricature. A bright colored dress, a flashy tie, several lapel pins, colorful hair ties: all things that are easy to spot and hard to miss. Obviously not every descriptor here is necessarily true for a single try-hard (though it would be amusing to see a guy wearing a purple polka-dot tie with a turquoise dress), but across the board these details tend to be consistent as to what kinds of delegates sport them. Once again, there is no one-and-done rule to be made here; some people can pull off everything.

That being said, Model UN is a social activity. Next to bad breath and a limp-fish handshake; nothing makes a worse first impression than overly-flashy attire. It catches the eye, but not in a good way. Look to real UN delegates. Look at Moon Jae-in himself. When they aren’t wearing traditional attire, mens’ suits are personalized with a properly knotted necktie and women bring some pop with a colorful shawl. Does this mean these are the only ways to stylize yourself in committee? Certainly not. But the rule can be clear and simple: good clothes can make a person.

Spend more time seeing how the clothes amplify your character rather than if they catch attention. The goal is to stand out for your proposed ideas and intellect, not your obnoxious clothing.

Everyone has their own style of research. Some kids prepare weeks beforehand, actively analyzing every facet of the committee topic. Others walk into the conference having skimmed the topic brief an hour before first committee. Without addressing the success rate of either method, there is a point where broadened research becomes overboard and in fact begins to detrimentally affect your performance.

Research (separate from solution prepping), per committee, should be centered around two cores: summary info and specific info. Summary info can be described as surface-level knowledge about any country or delegates in the room. Rough numbers such as their approximate population, GDP, or HDI ranking as well as summative history, politics, and economics. Specific info, meanwhile, is the country’s relevance to the topic at hand. If you are India in the UNHCR, it would be a safe bet to address India’s past experiences with gender equality, human trafficking, rights violations, and run-ins with the International Court of Justice (ICJ).

Altogether, there is no rule for length, word-count, or even page-count. However, more than once have I encountered delegates bearing research binders packed to the brim with borderline-unnecessary information. Ironically, these delegates are usually so overwhelmed with the random statistics and information crammed into their skull that they end up performing very poorly in the committee overall. Beyond the difficulty of simply remembering all that info, this all-in research strategy is not only dangerous, but comes across as pretentious. Delegates and chairs will lose respect for someone who cannot recall basic details, but Model UN is not about memorizing every instance of human rights violations in Venezuela’s history. Rather, it is about understanding how that broader history—little or extensive—relates to the future of human rights laws worldwide. Don’t waste your time, and next time, try to simply understand the grander machinations of international relations’ subjects; be they political, social, legal, or otherwise.

The key here is to stay focused at all costs.

It’s difficult to discuss Model UN stereotypes without acknowledgment of the possible synonymy one could find between a try-hard and a power delegate. Both tend to dress luxuriously or over-the-top, both are renown for mountains of research, both are generally articulate; yet they distinguish themselves in their end-goals. By and large, a try-hard will still look out for the greater good of committee and work towards a collective goal along with other delegates. Educational value is one thing, among many, that try-hards look for in Model UN. Meanwhile, power delegates are seemingly superficial people. Devoid of any higher purpose than to win, they are figures of disdain to the Model UN community. So, retain the wholesome attitude towards committee productivity and togetherness, but lose the cheesy add-ons that detract from your reputation as a serious delegate.

There is something of a happy medium to be found between these two Model UN stereotypes; take the positive intentions of the try-hard delegate with the focus of the power delegate, and peak performance can be achieved.

Model UN is about being different, in some ways: standing out, specializing in something, speaking your mind. At the same time, proper social interaction is necessary to enjoy and perform well in Model UN (as well as in the real world). You don’t want to be seen as a power delegate any more than you want to be seen as a try-hard. By following the steps listed above, these are just a few ways you can tackle the try-hard persona and make a real difference in committee.