My Experience Competing as a Solo Delegate 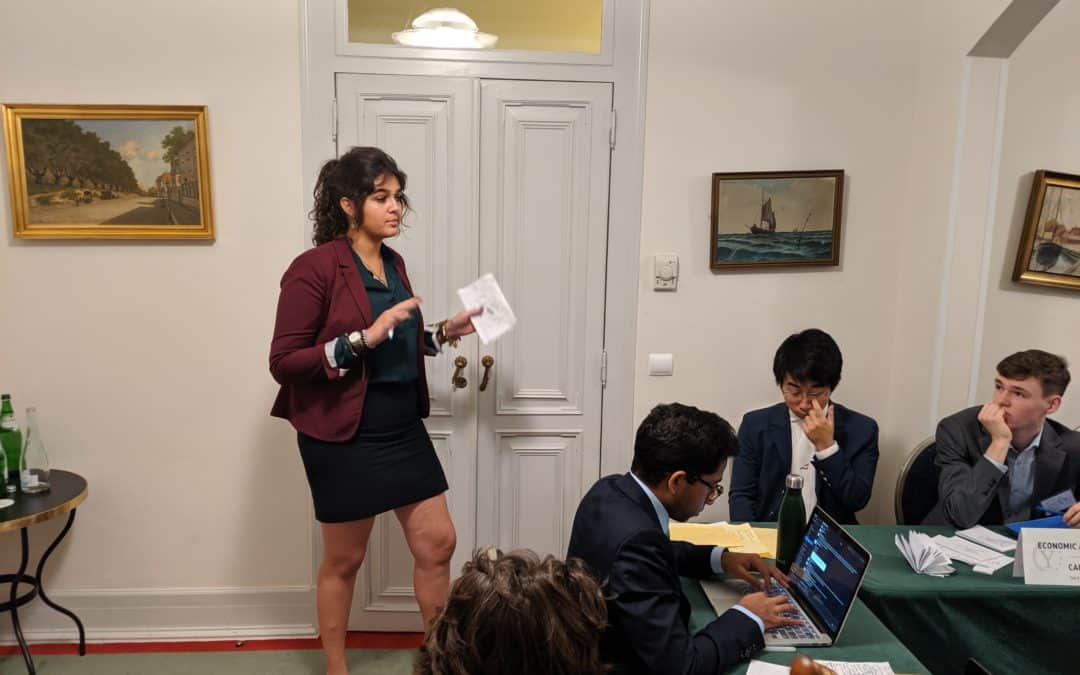 For those unfamiliar with the term, a ‘solo delegate’ is an individual who attends conferences alone rather than with a team, whether that be private or school-affiliated. This is a common practice for individuals who come from schools with no Model UN club, or a Model UN club with low activity. Attending conferences alone is a fantastic way to build up your skills, pick up awards, and eventually apply to compete with the All-American Model UN Team. Beyond that, though, competing in Model UN alone is a unique experience, one that comes with many highs and lows. During my sophomore year of high school, I competed at roughly 6 conferences as an individual delegate, and culminated this exhausting year with an acceptance letter to compete with All-American instead.

I am a firm believer in the power of the solo delegate, but I feel confident in my assertion that the experience is certainly an intense one.

By far the most painful aspect of competing as a solo delegate is the lack of support beneath you in terms of strategic help, committee feedback, or general advice as committee moves forward. More likely than not, if you are competing alone, you are probably sharing a hotel room with a parental guardian. After committee sessions let out, it is natural to want to let out all your adrenaline and engage in an enthusiastic conversation about how your committee went, the interesting turns that crisis updates took, how your working paper is coming along, and the exciting things that happened along the way.

The trick is that getting that critical advice post-committee session requires having someone there with you who gets it.

These conversations require someone to give you advice, expertise, or strategic guidance; and no matter how hard a parent may try, they won’t be able to provide it on the same level as someone who has competed themself or spent years mentoring delegates. It’s simply not plausible. The unfortunate reality is that this fosters frustration due to feeling like you are all on your own, and that inevitably puts you at a disadvantage when competing against delegates equipped with coaches as resources.

When competing alone, you don’t have the luxury of a predestined group of friends to fall back on; so, you are simply forced to meet new people at every step of the way.

Finding people to eat lunch with, sit with at opening ceremonies, and walk to committee with may seem like minuscule happenings that contribute little to the overall conference experience, but the same is not true for solo delegates. The lack of a team makes every interpersonal connection that much more meaningful, and the friendships made along the way are infinitely stronger since you have the opportunity to spend so much more time with them.

In short, attending conferences alone will force you to meet new people, because if you don’t, then you’ll be left sitting in your hotel room alone. Just like in Model UN, constant adaptation is crucial to survival.

You will be isolated at times.

Before I expand on this topic, I will begin by saying that competing as a solo delegate does not mean by any account that you won’t make as many friends. In my experience, it is actually the conferences I attended alone where I met people and made more new friends.

What is true, however, is that the logistics of attending a conference alone do demand that you spend more time alone. You won’t have roommates to spend time with in the early hours of the morning when you probably should be resting for the day of committee sessions ahead. You won’t navigate the airport, or spend 7 hours on a bus, with a team full of friends; your commute, instead, will likely just be you and a parent. If you win an award, you won’t have a crowd of teammates screaming your name as you go up to collect your certificate.

I won’t deny that there are certainly parts of the solo delegate lifestyle that are admittedly lonely.

But, in these instances, a quick call to a friend or a text to a teammate back home will remind you of your reasons for attending the conference in the first place.

There are no distractions.

One of the most stark differences between competing with a team versus competing alone is the level of focus. When competing alone, there are no roommates to keep you up at night chatting rather than getting the rest you need. During lunch breaks, there is no team to meet up with, so you go with kids from your committee and work on your paper together.

Your productivity and focus on committee will skyrocket because, well, there really is no alternative.

The results that such intense focus can yield in terms of awards are astounding. You will be better researched, you will write better clauses, you will deliver better speeches, and you will put infinitely more thought into your strategy for committee.

All in all, competing as a solo delegate is a very efficient, cost-effective way to garner more Model UN experience, make more friends, win more awards, and experiment with different strategies and types of committees. Certainly, there are drawbacks and sacrifices that must be made along the way, but it is all for the betterment of your skills and the furtherance of your Model UN career. In this regard, so long as you have your reasons for participating in ModelUN clear in mind, the minor social setbacks that come from competing alone will feel minuscule compared to your larger goal at hand.

I know that I would not be the delegate I am today without having put in my time as a solo delegate.

I won my first gavel as a solo delegate, and the memory of sitting quietly in the back row of closing ceremonies with my mother when my name got called out–only to be met with silence from the audience–is something that has always stuck with me.

I had no teammates to cheer me on, no coach to give me guidance along the way; but somehow, that made the accomplishment all the more meaningful and hard-earned. For anyone struggling to get momentum going with their Model UN career, I would recommend taking a few road trips with your parents, or even attending some local conferences alone. However strange it may feel at first, it is nothing a resilient Model UN delegate cannot handle.