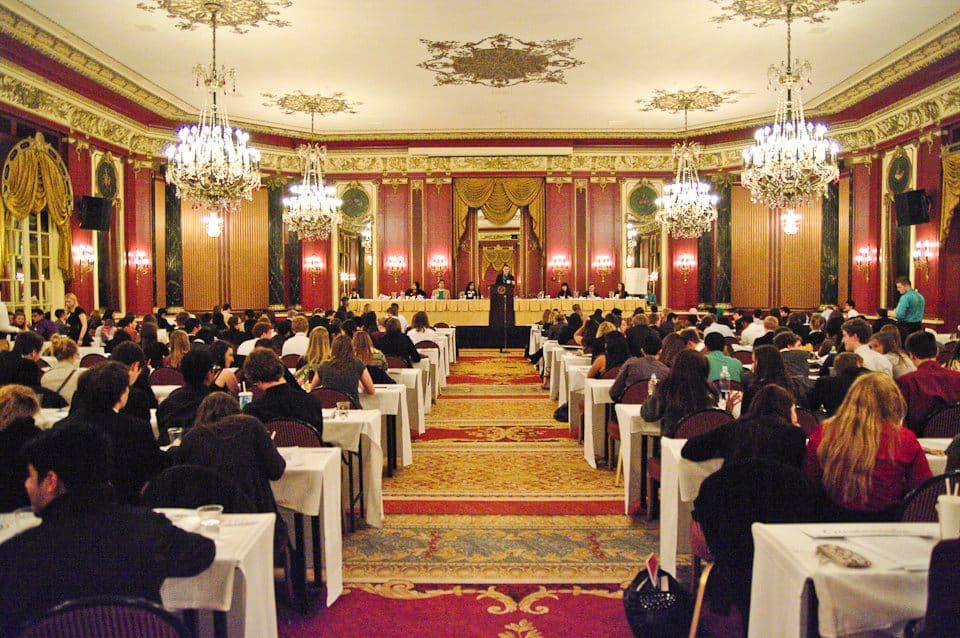 MUNUC vs. CIMUN: The Contradictions of the Chicagoland MUN Circuit

Not cool enough for GAs, not clever enough for crisis. I've traveled with All-American to NAIMUN, WEMUN Expo, and HMUN India, and serve as the Alumni Associate for the Midwest.


MUNUC vs. CIMUN: The Contradictions of the Chicagoland MUN Circuit

In conversations about Model UN in Chicago, the two conferences that seem to pop up most frequently are Model UN of the University of Chicago (MUNUC), and Chicago International Model UN (CIMUN). Generically, both have a fair amount of similarities. Both are large (2,600 and 1,500 delegates, respectively), both are located at large, illustrious hotels in downtown Chicago, both offer high-quality MUN experiences to advisors and delegates. However, upon closer examination, these conferences are emblematic of the conflicting philosophies in MUN, specifically in the Chicagoland area, and how these viewpoints manifest themselves into the conference and debate experience. Here are some of the most important differences:

These conferences are polar opposites in the values they believe Model UN should be aim to represent and consistently incorporate into their debate practices. MUNUC is a traditional, large conference with traditional MUN values; it rewards collaboration, diplomacy, and is willing to look past lapses in country policy for the sake of teamwork. CIMUN subscribes to a different value system that is just starting to gain more traction in modern MUN: realism. Encouraging the most Machiavellian of tactics and the most staunch of country policy, CIMUN aims to teach its delegates what the world of politics is actually like, rather than what it should be. This has resulted in a lot of “CIMUN Stories”: a cabinet’s Attorney-General arrested all the other members of his committee for fear of being assassinated, and a member of the International Press Delegation started a website called “CIMUN Leaks”, leaking important crisis news they gained from talking to other delegates at the conference.

While both conferences obviously look for the traits they value in delegates when designating awards (collaboration at MUNUC and policy adherence at CIMUN), there are also important differences in structure that highlight the struggle between the more pedagogical and more competitive elements of Model UN. MUNUC refuses to dole out delegation awards and does not focus on awards at all as part of the overall experience. Rather, they choose to reward  and thank individual delegates who they believe contributed to the debate at hand. MUNUC’s three levels of awards at Verbal Commendation, Honorable Mention, and Outstanding Delegate, with more than one of each award being offered in the largest committees, and Outstanding Delegates being awarded books instead of the coveted gavel.

CIMUN’s approach is the near-opposite, practically encouraging advisors and Head Delegates to figure out strategic ways to game its awards system. Delegation awards are given out by nation rather than by school, with the largest committees being worth more points than the smaller ones. Cabinet points are added to the school’s highest-scoring national delegation and are worth around the same amount as the largest General Assembly Plenaries (CIMUN likes to encourage its experienced delegates to participate in cabinets). These individual committee awards encompass the Honorable Mention, Outstanding Delegate, and Best Delegate, and a separate gavel is given out through a Delegate’s Choice vote. On top of this, CIMUN also hands out full-conference awards for position papers and crisis plans and eventually, all these points are added together into a 1st, 2nd, and 3rd place national delegation.

These two conferences are run by entirely different types of management: run is college-run while the other functions as an educational MUNUC is entirely staffed and run by students at the University of Chicago, some who are members of the school’s incredible Model UN team, but many who only have experience in staffing high school conferences. While the background guides are consistently exhaustive and well-written, there can be inconsistency present between the quality of substance in committee and the quality of debate itself, with chairs often inexperienced and unable to handle larger or rowdier rooms. CIMUN’s operators like to proclaim that their conference is run like a business. They offer delegate and hotel fees in one combined registration package and recruit volunteers from throughout the country to serve on staff. While background guides and the substantive quality of debate varies from committee to committee, chairs are generally very experienced and are adept at controlling the room. This is because many of the chairs have been around CIMUN for longer than the typical collegiate student chair and are a combination of very experienced college delegates/chairs and graduates still involved in Model UN, and all of this accumulated knowledge from a large variety of resource bases leads to a smooth committee experience.

These two Chicago conferences hold completely disparate views on the amount of technology that is suitable to be incorporated in Model UN, consistent with their contrasting principles of tradition contrasting a more modern approach. MUNUC is entirely technology-free. All students write the entirety of their resolution (some stretching for up to 30-40 clauses) on paper with a pen, which they submit to the chair and have the chair type up. From there, chairs will give feedback on the working papers, and merging will take place, usually through writing a list of the kept clauses and edits on a separate piece of paper that is handed to the chair  so they know which clauses to cut and paste from each document. Crisis methods and guest speakers are also coordinated through traditional, physical means as well, with the normal array of costumes, toy guys, and exuberant, borderline cringe-inducing, acting from “Syrian villagers”.

CIMUN, meanwhile, embraces technology and all it can offer to a Model UN conference. Delegates are allowed to use laptops during unmoderated caucuses to write resolutions, and laptops is generally where most of the writing takes place in larger committees. CIMUN also incorporates a wide variety of technology into its crisis schemes; each committee is equipped with a screen that has a ticker updating the committee on the goings-on of the rest of the conference. CIMUN even has its own news show — CIMUN News Network (CNN) — which is shown to all delegates at multiple points throughout the weekend and plays on a channel on the hotel televisions. This type of technology allows CIMUN staff to split the conference into two large simulations, one present-day and one historical, where all committees work together or against each other to solve inter-connected crises.

Both conferences do very well for themselves and attract a wide variety of motivated, talented delegates. MUNUC tends to draw more from the international and out-of-state community, while those attending CIMUN mostly come from the Chicagoland area. In fact, it is CIMUN, not MUNUC, that is known as the “Superbowl” conference of the Chicago region because it is the multi-day conference where most of the top-tier schools from Chicago attend (with the notable exception of the University of Chicago Laboratory Schools). MUN teams looking to win gavels and delegation awards have shied away from MUNUC in the past because of its awards policy, and coupled with its location at the historical Palmer House in downtown Chicago, the conference is considered to be a learning experience, rather than a competition (which fits with MUNUC’s pedagogical mission), with the focus being on each delegate leaving the conference with a deep understanding of the issues they discussed and their topicality.

As such, while both conferences take place in Chicago, they are representative of completely different Model UN philosophies and aspects of the Chicagoland circuit. As a delegate who has attended each, I find both of them to be engaging and educational experiences for different reasons. MUNUC is traditional Model UN done extremely well; their background guides are top notch, the substance and quality of resolutions is some of the highest in the country, and the people I have met and collaborated with in caucus blocs and even on opposite ends of committee have been kind, intelligent, and diplomatic (contrary to many aspects of today’s world of hyper-competitive MUN). CIMUN is a new, fresh take on Model UN, and representative of the modern world of politics and an interconnected, globalized world. Full-conference crisis simulations, committees whose actions impact one another, and a focus on realistic country policy makes the conference exciting, fast-paced, and fun.

Though they are close-to-opposites in operation and philosophy, I find merit in both systems because MUNUC and CIMUN both respect and execute their visions for their conference to the utmost, and this is apparent in the materials they provide delegates, how they run debate, and the obvious passion both staffs have for Model UN. I look forward to attending both conferences for the last time this MUN season.