Structure of a Crisis Committee in Model UN

Crisis committees are a popular committee style you can find at almost every conference on the Model UN circuit. These committees are unique in the fact that they deviate from the more recognizable and common understanding of Model UN. Instead of delegates representing a particular country and debating real-world issues, crisis committees can represent a wide range of organizations, boards, or groups, and delegates will usually act as a character instead of a country. Topics can span from historical to futuristic, or even borrow plot lines and universes from your favorite TV shows and movies.

Crisis committees are generally considered to be more ‘fast-paced’ than General Assembly committees, so it’s important to go in prepared. If you aren’t yet comfortable with parliamentary procedure and the basics of Model UN, we recommend reading up on our introduction to Model UN procedure lesson before delving into the specifics of crisis committees.

It’s helpful to think of crisis committees as a game. Your goal is to create and advance your character’s goals in order to ‘win’ committee in the end. Winning in crisis means having your plans or your storyline (called a crisis arc) win out and become the largest and most significant one by the end of committee. You accomplish this through two avenues: back-room and front-room.

Back-room encompasses actions taken outside of the public eye and are usually to advance personal objectives throughout the course of the conference. Back-room actions are generally taken through the use of crisis notes, also known as personal directives or communiques.

In this MUN 101 lesson, we will be focusing strictly on front-room. For a detailed guide on how to navigate the back-room in a Model UN crisis committee, click here.

Front-room is a term that comprises any and all action that takes place publicly in the committee room, though your intentions behind taking action may be private.

Additionally, directives are a great tool for showing the dais that you’re a leader in committee as long as you don’t take it too far and come off as a typical ‘power del’, who is someone that is rude or overly aggressive to other delegates in the room in order to win more gavels.

Some additional strategies to consider when writing directives include:

Example of a Crisis Directive in Model UN: 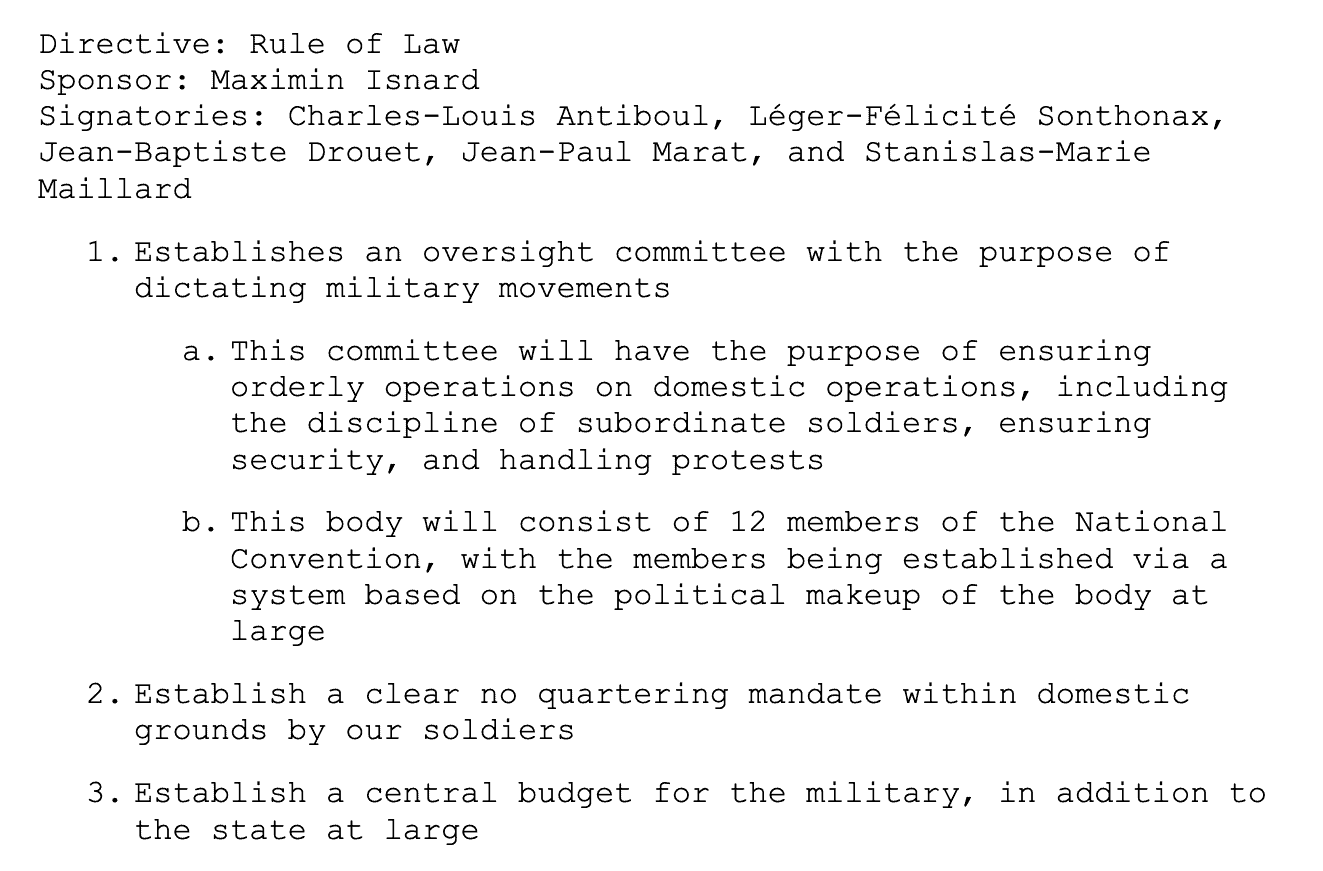 Some delegates are strongly against press releases simply because they don’t do very much in the scope of the committee and its aims. This can be combatted by pointing out that the committee has not reached out to the public, and it’s imperative to do so in order to maintain good relations and increase transparency.

While press releases are a strong way to show leadership and make you stand out to the dais since they’re relatively rare, make sure not to overdo it. At the end of the day, directives are still more significant because they involve taking real tangible action and will be the bulk of the work done in committee.

Example of a Press Release: 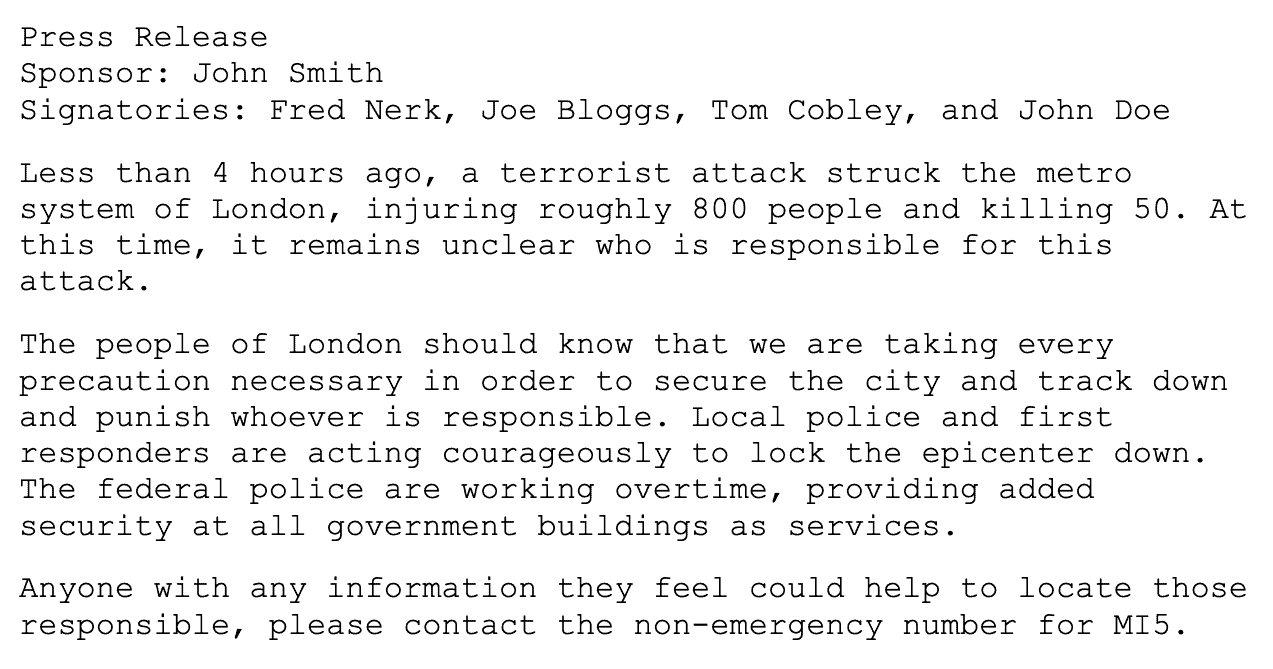 In some committees, restrictions on the number of directives/press releases that can be on the floor at once are small, making mergers necessary. Unlike in GA committees, mergers are much quicker and more straightforward, simply because there are many more rounds of directives to go through, and because crisis committees generally move faster than GA committees.

Merging directives or press releases in crisis committees happen during unmoderated caucuses (unmods) that are shorter, usually no more than 15 minutes long if even that. During this time, you should try to find a bloc with a directive/press release you think could go well with yours. Strategically speaking, it can also be good practice (depending on committee dynamics) to try to merge with a bloc that doesn’t have the strongest or most powerful delegates in the room, giving you an easier path to assert yourself as the leader of the merger.

Similarly to GA, the position of your paper in the physical directive/press release that is submitted is important. Having your contents first in the merged paper signal to the dais that you are the leader of the merger. This is where strategically picking the bloc you merge with comes in handy. Weaker delegates will usually not put up too much of a fight when determining paper order. Other times different approaches are more appropriate. If your paper has the most signatories, you can claim that as a reason for why yours should be first. Preferably though, you are the one organizing the merger, renumbering the clauses, and making sure redundancies are crossed out, at which point no one will challenge you to get on top since you clearly lead that merger.

It’s crucial to note that getting your paper on top is not always worth losing the political capital and risking coming across as too aggressive to the dais. If the fight to get on top seems like it’s about to become a blood bath, then don’t give up everything for that position. In Model UN crisis committees, mergers are done in the view of the chair, so the dais will take note if you’re organizing a merger and a power del inserts themselves and staples their paper on top. Another workaround when dealing with a power del is to tell them that you either have already merged with a different paper or would rather see their paper debated separately from yours. This way you are diplomatically rejecting their merger.

If you are planning on merging with a bloc led by another strong delegate, in some cases it can be helpful to make a side agreement with them. This agreement can include provisions such as switching off for whose paper is on top or inclinations towards future mergers or collaboration opportunities. However, do not do this unless you feel comfortable with this person and their trustworthiness.

Cover pages are another great strategy to get around whose paper ends up first in a merger. Cover pages are essentially a sheet of paper placed on top of all merging directives/press releases with the name of the merged paper, sponsors, and signatories. Even if your paper is already on top, cover pages can be used to show the chair that you are being diplomatic. Not only does this show that you led the merger, but also that you are diplomatic and not a gavel-chasing power del.

One of the most frustrating parts of a large General Assembly committee is the lack of face time. GA is a constant battle of trying to make sure you’re speaking, presenting, and making your presence in the room known. Crisis works almost in the opposite way–in crisis committees, it’s not uncommon to speak multiple times within the same moderated caucus (mod). This comes with the benefit that you will have many more opportunities to speak, which can help with visibility. However, many delegates face challenges with bringing something new to the table each time they speak. Keeping speeches engaging and substantive in Model UN crisis committees is imperative.

Crisis speech mechanics are similar to GA speeches. It’s good practice to start off with a hook, usually a statistic or personal anecdote (personal to your character, not you) to engage the audience. Then, move onto the substance of the speech: your directive, your ideas or stances, why your plans are better than others, etc. Crisis speeches are less formulaic than GA speeches, and there’s much more wiggle room with how much tone and inflection you can demonstrate. In other words, don’t be afraid to make some of your speeches dramatic, as long as it’s used in moderation and only strategically to emphasize important points.

More opportunities to speak means you should also always keep your placard raised, which can sometimes lead to you getting called on when you don’t have too much to say. This can be solved by making a speech reiterating previous points by stressing their urgence. Make sure to say something to the effect of, “At the risk of sounding like a broken record, it is imperative that this body does not forget X”. Another common mistake made during crisis committees is speaking in the third person. In GA, you were taught to always refer to your country by name in speeches, and never say “I” or “Me”. Crisis works differently, because most of the time you’ll be portraying a person or a character, you should embody that person’s positions by using personal pronouns, “I” and “Me”.

Another useful strategy to employ is speaking during for/against periods. These are shorter motions that usually occur right before voting for a particular directive. In most committees, for/against periods with have one or two speakers to speak for, and one to two to speak against. Use this time to pick on one or two clauses, either that are amazing and crucial for the success of the committee, or that are awful and would ruin the entire committee if passed. These speeches are a great way to show that you’re engaged, listening, and still able to analyze what is and is not good for the successes of committee as a whole. 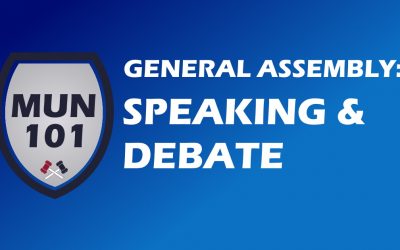 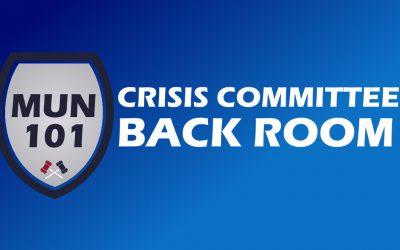 Congratulations! You have made it to the home stretch of your General Assembly. By this point, hopefully, you have...