Clarity versus Embellishment in MUN Argumentation 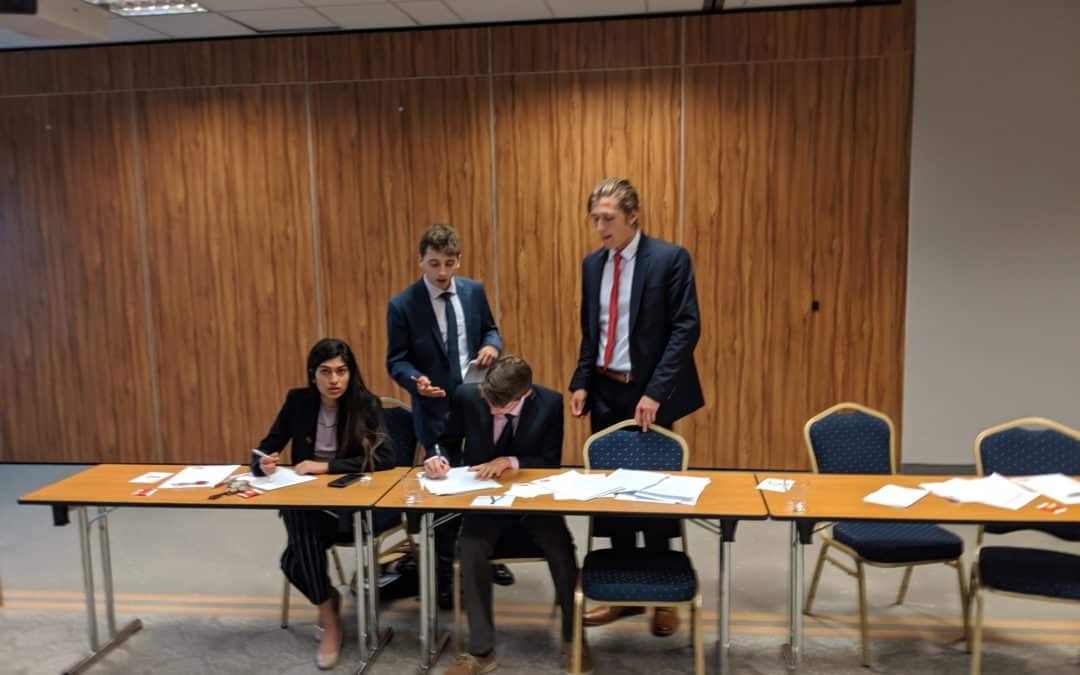 “The United Kingdom has been recognized for one minute,” the chair sternly announces. Though the delegate representing the U.K.’s robust vocabulary, complex syntax, and clear projection seem to mesmerize the dais, much of committee sits with furrowed eyebrows and blank pages, struggling to decipher the details that they expect the delegate’s elegant words to articulately convey. Despite the unique values, simulations, and operations of each conference, the emphasis on cogent speech seemingly tried to unite them all. Although this shared priority somewhat universalizes what it takes to succeed in Model UN, the art of giving an excellent speech remains subjective at best, and arbitrary at worst.  Does the MUN community as a whole prioritize delivery? Content? A combination of the two? And what changes, if any, does the current system of evaluation demand to make debate as enriching and equitable as possible?

Conference weekends during which uninformed, passionate speakers seem to prevail over their more knowledgeable counterparts leave many coaches and delegates questioning Model UN’s legitimacy in evaluating speech. This overemphasis on rhetoric may cheapen the educational experience of debate, shifting the focus from the intellectual and academic to the theatrical and dramatic. Although more forthright speeches sometimes do not receive due credit for the innovative ideas they represent, the consensus from All-American Model UN alumni and students seems to be that clarity and content often prevail over flamboyance in committee, despite anecdotal evidence that suggests otherwise.

“Substantive speeches are much more valued in debate than “flowery” ones because it’s not usually the latter that influences debate. Once you put that delegate with no clear point to their position against a more-researched delegate, the latter will quickly assert dominance during the draft-resolution process,” she says.

Skilled impromptu speakers who are unprepared often struggle with resolutions because they cannot use their rhetorical prowess to cover up inadequate content.

Also refuting the belief that Model UN often undervalues content at the expense of rhetoric is All-American Alumna and current Yale student Neelam Sandhu, who assures that superfluousness is recognizable and already discredited among chairs in addition to delegates.

“I think clarity is valued over embellishment. It’s quite easy to tell when a delegate is talking in circles. If the speech doesn’t push the debate forward, it’s often not as noteworthy or memorable. That’s not to invalidate those speeches—they do have a purpose on occasion, especially if it gets people who don’t speak often to get out of their comfort zone and talk. However, when it comes to awards, I personally look for someone who is actually using the committee topic to actually try to solve something instead of talking louder than others,” she says. Sandhu bases her assertions on an impressive high school Model UN career that has extended to her time at Yale, where she most recently was Under-Secretary-General at Yale Model United Nations in 2018.

Sandhu explains that chairs already value brevity, originality, and specificity above any rhetorical embellishment. Underdeveloped, articulate speeches usually resonate negatively with chairs, especially since most share the frustration of having experienced those “empty” speeches firsthand as delegates themselves.

“I think in high school MUN it’s really common to find a lot of people getting caught into trying to be the loudest delegate in the room because they think that’s powerful. In reality, the best speeches have a purpose and call to action that will push the discussion further,” Sandhu says.

She adds that efficiency, originality, accuracy, and specificity are most valued in committee argumentation. The most compelling speeches use rhetoric to enhance rather than overpower their content.

“Speaking effectively is important. You just can’t have one without the other. You always need a little bit of embellishment or engagement if you want your content to be effectively communicated to the room.”

Natalie Melms, All-American alumna and recent graduate of Wisconsin’s Edgewood High School, agrees that a delicate balance of rhetoric and content forms the most compelling speeches.

“Chairs, and delegates for that matter, don’t understand a speech that is solely made up of embellishment. If you make a substantive speech that is also clever, however, you’re definitely recognized for that. I’ve seen plenty of people win outstanding delegate who didn’t even sponsor a paper—they were just very researched, good speakers, ” she says.

So, given this reflection that rhetoric alone does not suffice without strong content, what’s next for the MUN community? How do we counter the stereotype that MUN rewards superfluousness without substance? How do we enhance debate and shift MUN culture by training delegates to implement the balanced persuasive speech that the activity values?

Maheen, Natalie, and Neelam offer a few suggestions to propel this shift in MUN speechmaking.

Maheen offers guiding questions that delegates should use to frame their speeches: “Yes, the first sentence should be thought-provoking—say something that will wake up the sleepy delegate in the corner. But just as soon as the delegates perk up, you have to give them a reason to stay up. What is your solution to the issue? What is the flaw in debate everyone is ignoring?”

Natalie points toward solution-oriented speaking. “We need to teach speech-making that grabs attention with emotion, backs up emotional statements with facts,  and most importantly, provides a solution.”

Neelam also sheds light on how to shift MUN speechmaking culture by training more delegates to adopt both fluent and informed speechmaking that MUN-especially the college circuit- intends to reward.

“In college at Yale, we do round-robin debates about current politics so we can use real content and stay up to date. In college, the biggest push is to have substantive research backing everything you do. When high school students have extensive knowledge of the topic, it stands out. I personally think that delegates should be taught to structure their speeches around a goal to push committee forward.”

So while Model UN sometimes bears the stereotype of rewarding the superfluous, chairs and delegates assure that that is often not the case. Although the overuse of embellishment may be popular, it is definitely not the most valued quality in committee. To many members of the community,  Model UN argumentation from the evaluative side is already quite fair, realistically rewarding those who gracefully intertwine persuasion and subject matter. If not backed by our system of evaluation, the perception of MUN as a replica of political artifice arises from speechmaking training that often does not align with the intellectual, solution-based approach that MUN values.

As a community, we should work to instill that the best delegates should speak not to impress, but rather, to communicate and propel change. By emphasizing the more authentic communication that chairs and conferences prioritize, we will not only strengthen the intellectual nature of Model UN but also serve as the vanguard of the much-needed shift in our current political climate away from the public image and towards policy.