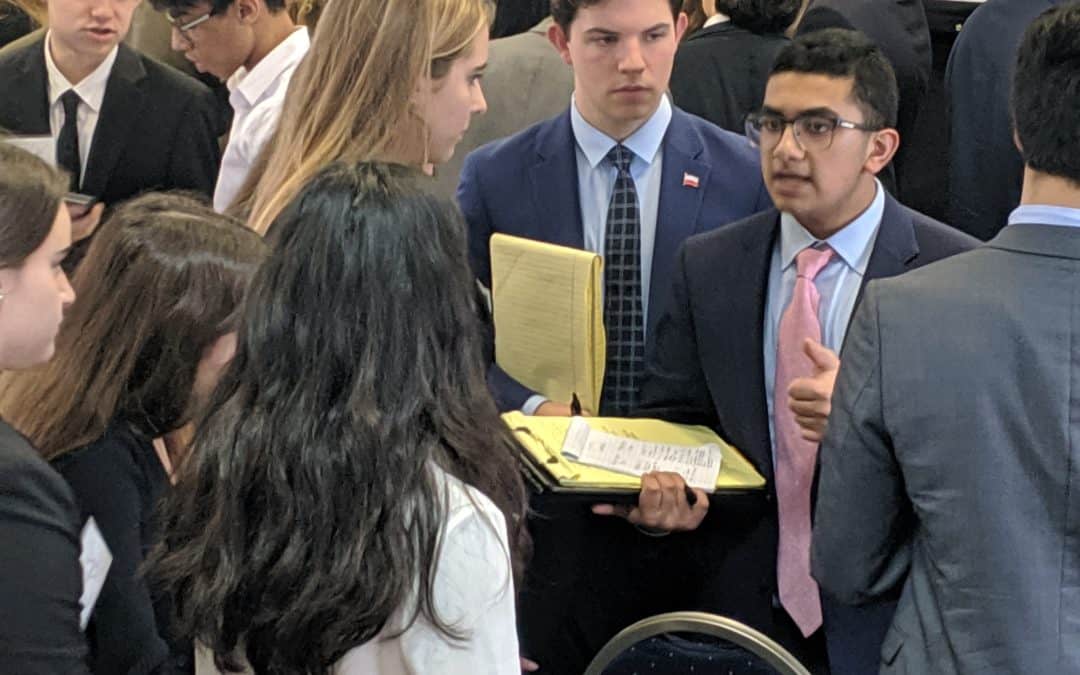 The staple of every major college-run Model UN conference is the massive, standard General Assembly; be it DISEC, SOCHUM, or SPECPOL, these committees can sometimes contain as many as 300 delegates, or more. It goes without saying, then, that making yourself known in such a sprawling committee room can be a challenge. Ultimately, it all comes down to bloc leadership.

When you walk into that first committee session, you have one goal: create the most powerful, secure bloc.

Do that, and manage it for the remainder of the weekend, and you are sure to win a high award. It really is that simple. The process of creating, leading, and maintaining that bloc, however, is something that must be done with intention and highly strategic planning. Come in with a game plan, and be deliberate when taking steps to create a bloc, and everything will work out in your favor.

1. Send notes from the first minute of committee.

During the first round of speaker’s list and moderated caucuses, you should be paying close attention to what other delegates are bringing to the table. Yes, it can be painful to listen to the same redundant speeches, and that makes it tempting to zone out. Refrain from doing so, as it will put you at a distinct disadvantage to your opponents. Your first priority is sending notes to delegations who express similar approaches to the topic, because you could potentially recruit them to your bloc. Send them a note: introduce yourself, outline what you have in common with them, encourage them to keep communicating with you, and give them a designated location to meet you during your first unmod. This is a critical step in bloc development, because once the first unmoderated caucus breaks out, chaos will fall over the committee.

Your bloc must have a centralized location that you can direct potential recruits to: otherwise they will get swept up into more organized blocs.

Your second priority for sending notes is to delegations with slightly differential approaches to the topic, but still some overlap. Your aim here is to be known across the room, not just within the sector that shares your bloc position. Engage in a genuine conversation: ask them questions, push back on ideas they expressed during their speech, or provide alternative evidence or ideas. This is a subtle, but critical way to establish yourself as an integral member of your bloc, and broadcast that role across the entire committee room through one-on-one notes.

For more help with writing notes, check this out: 4 Ways to Make Your Note Passing More Effective

The biggest and most common mistake made by bloc leaders is getting too big, too fast. If you expand too quickly and try to take over too much of the room, you will not be able to maintain stability, and disorganization will be inevitable: delegates will start splintering off around the edges, and join new blocs that are small enough to put them to work and make them feel needed.

During that first unmoderated caucus, focus on gathering together a small, focused discussion circle. This original bloc should be composed of only 5-7 delegations connected by common ideology, as this size allows for maximum efficiency and productivity. Don’t worry if a few people trickle in and out of the circle, things will settle soon and you will be left with a small group of dedicated delegates. Once you have this core group of delegates who are committed to the bloc, give everyone a role, and then begin the process of recruiting more delegates.

Recruiting and expanding the bloc is impossible without a commonly agreed-upon set of key ideas that will make up the working paper.

Decide on these central guiding ideas with the smaller, original bloc in order to avoid conversations with 30+ delegates screaming over each other, vying for speaking time. At that point, it may be too late.

While every bloc must begin with a messy bullet point list of raw ideas, the group is not really legitimate until clauses are written down.

Your goal is to be the first bloc to get down to business, because productivity will put you ahead of less organized blocs. Further, getting right to the writing process will help you stand out to the chair as a focused, serious bloc.

Once you have established who is in your initial bloc, you must find your group’s niche. What solution idea do you share that no other bloc has? What is the unique commonality that links all members of the bloc together? What sets you all apart from everyone else? Once you have decided on this niche, capitalize on it. Scream it from the rooftops! Recognition is key to bloc success.

When presenting a bloc, do not begin by introducing the same education clauses that every other bloc has. Cut to the chase, use your niche to garner recognition.

By starting your bloc off small, you have created a space that is safe and fair, where all voices can be heard. This atmosphere will come in handy later on in the conference when you are faced with tricky mergers that threaten the survival of the bloc’s ideas and work. Being a bloc leader should not be an uphill battle, it should come naturally by way of contributing positively more than any other member of the bloc. Outside of delivering quality speeches, writing well-crafted clauses, and speaking up during unmoderated caucuses, establishing positive leadership is about getting to know your fellow bloc members. Know their real names–no, their country names do not count–and crack a joke or too. Taking time in between committee sessions to chat casually with bloc members can often be more effective than ruling with an iron fist.

In short, likeability matters, so do not dismiss it in favor of power playing.

Lastly, and perhaps most importantly, never, ever, lose sight of the collaborative value, even as the bloc expands and paper grows. With so much pressure in the committee room, there will likely be delegates who fall away from their original blocs, turned off by “power delegates” or toxic behavior. These people are looking for a place to contribute their hard work, a bloc free of the toxicity that plagues most competitive General Assembly committees. Your goal is to be that place. Welcome people with open arms, and be the bloc that everyone feels comfortable approaching. Kindness is attractive to shy or novice delegates, plus your chairs and other delegates will appreciate the positive contribution to committee. Diplomacy plays a huge role in deciding awards, and a positive reputation in committee will give you the votes you need to pass your paper. These small acts will give your bloc the reputation of being “the sanctuary,” the one bloc null of drama and the one that will have gradually accumulated masses of delegates as a result of that reputation.

All in all, bloc management comes down to substantivity, likeability, and strategy. Start building a bloc as early in the committee as possible, and build a brand from there. Follow your gut, be a good person before being a good delegate, and people will flock to you naturally. In short, trust the process!

Related Article: Being Friendly Will Put You Ahead in Committee


Related Article: Overdoing It: The Danger of Becoming a Model UN Try-Hard and How To Avoid It