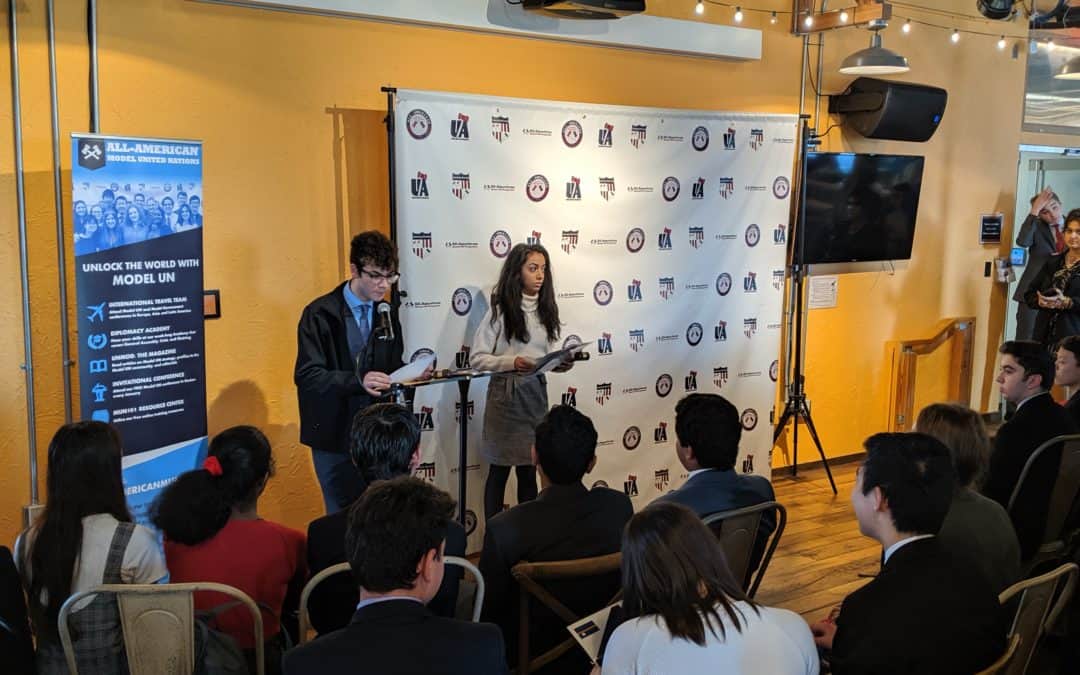 Above all else, All-American Model UN gave back to the Model UN community by keeping the conference 100% free of charge for all attendees.

Here’s what happened in each of the committees this weekend, along with a complete awards list:

The UN Security Council discussed the ongoing conflict in Yemen with regards to the abundance of proxy forces fighting in the region and the escalating humanitarian crisis. Delegates dealt with the impossible task of balancing peace talks and political negotiations with the various non-state actors and militias in order to open up ports for resource distribution and working against the cholera outbreak and rampant starvation. Ultimately, delegates were able to pass an in-depth resolution which detailed the disbandment of the Houthi government and called for free and fair elections for a new coalition government; the first legitimate election since 2012.

Delegates in the UN Human Rights Council conducted a Universal Period Review of Malaysia; the UPR is a periodic action of the HRC in which the council oversees an exhaustive assessment of the state of human rights in one specific member state. As such, delegates discussed a wide range of humanitarian topics as manifested in Malaysia, from the death penalty to human trafficking. After completing the UPR, delegates moved on to discuss current events, specifically the recent allegations of prisoners in the People’s Republic of China being executed arbitrarily for the purpose of organ harvesting.

Set in the late 1990s, the Khasavyurt Accords was a historical crisis committee that discussed the outbreak of the First Chechen War, pitting the south-Eastern region of Chechnya against the Russian federal government. With positions representing both Chechen and Russian officials, delegates with radically oppositional positions were forced to attempt peace talks in an effort to construct a peace treaty that would prevent the impending threat of all-out war. Delegates leaned into the nuance of the situation by working with various non-state actor stakeholders in the conflict, such as the International Islamic Peacekeeping Brigade, in order to address the rapidly heightening tensions and subsequent humanitarian crises in the Chechen capital, Grozny.

The Parliament of Nauru spent the weekend discussing the economic revitalization of Nauru, a tiny island state in Oceania with little access to natural resources and a subsequently high dependency on importation from foreign markets. In a dramatic conclusion to the committee, delegates negotiated with the People’s Republic of China to approve a series of Belt and Road Initiative projects across the island that would provide essential infrastructure; however, the arrival of Chinese personnel quickly devolved into a foreign occupation of the island, and delegates were forced to respond to crisis updates regarding the arrival of Chinese troops and other military escalations.

Delegates in the IBRD conducted loan proposal reviews for the nations of Costa Rica and Egypt. In the case of Egypt, delegates discussed issues of tourism industry redevelopment and specific investment strategies to best reinvigorate the tourism private sector to relieve the perpetually expanding national debt. As for Costa Rica, delegates addressed the expansion of rural infrastructure development in order to bolster urbanization efforts in the pastoral regions of Egypt. Ultimately, delegates were successful in passing three loan proposals for Costa Rica as well as engaging in a fruitful debate regarding environmental protectionism and eco-sustainable tourism expansion.