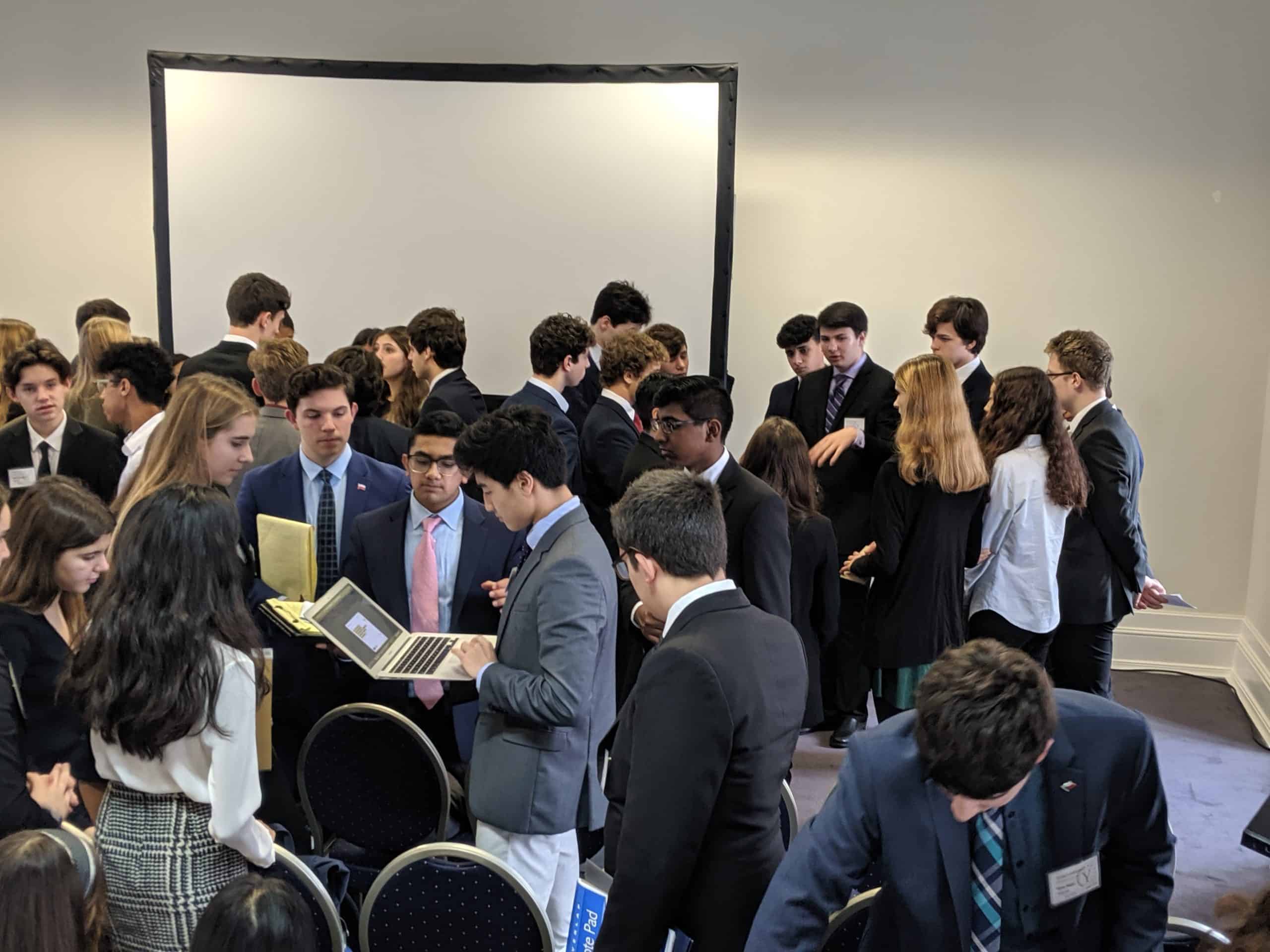 A Model UN unmoderated caucus–colloquially an “unmod”– is a motion in which debate goes unregulated: delegates are free to get up from their seats, and move around the committee room to discuss with other delegates or work on writing papers. These caucuses–though they typically do not last longer than fifteen minutes–are notoriously chaotic, particularly at highly competitive conferences. Delegates standing on chairs, yelling, interrupting others, running frantically around the committee room; these are but a few examples of the general disarray which plagues a typical unmoderated caucus.

Given the insanity of an average unmoderated caucus, it can be difficult to stand out as a leader amidst all the struggle for power. That being said, in taking a step back, there are a few minimalistic and simply implemented strategies that will separate any delegate from the madness and thus demonstrate obvious leadership.

1. Look up; survey the committee room.

As soon as the unmoderated caucus begins, delegates will immediately begin stratifying into smaller blocs, or little pods, to discuss the topic. A classic mistake made by many delegates is becoming too engrossed in their own bloc to notice anything else going on in the room. Of course, pay attention to the discussion, and contribute heavily, but do not forget to look up every few minutes to notice other blocs. Delegations that you may have the same policy as, or even sent notes to during the speakers list or moderated caucus, could be in another bloc, and it might be in your best interest to speak with them. There may be–and likely are–delegates wandering aimlessly around the peripheries of blocs, looking for a bloc to belong to: that is a fantastic opportunity to be a leader, and one that can only be taken advantage of if noticed in the first place.

In short, be aware of surroundings at all times; it will help.

Again, the biggest and most commonly made mistake during unmoderated caucuses–particularly the first unmod of the day or the conference–is sticking with the same group of individuals the entire time.

To be a leader, your goal is to become the spokesperson for your bloc; to do so, you must visit other blocs, discuss potential mergers, and establish a relationship with other bloc leaders.

Early on in a conference, there will always be more blocs. Another great way to establish yourself as a leader is to unite other smaller groupings of delegates into one larger bloc. The proper way to do so is to walk around, discuss ideas with different blocs, point out the commonalities, and then bring all those delegates together in one part of the committee room. Hence, you become a beacon of collaboration and togetherness by fostering more cooperation, and you also establish yourself as the architect of the bloc.

Any veteran delegate is all-too-familiar with the classic line: “guys, can we please open up the circle?”

The existence of this Model UN cliché is indicative of the fact that in times of chaos, delegates tend to forget basic manners. Screaming over others, interrupting, monopolizing speaking time, cutting people out of the circle, or ignoring the ideas of other in favor of getting your opinions out there more; these are all examples of behavior that are ultimately detrimental to your likeability in committee and will thus destroy any chance of being a natural leader.

Instead, take a step back; remember that an unmoderated caucus is nothing more than a discussion, a group conversation just like any other.

So, let others voice their opinions, and pay attention, as in really invest in listening to others. Do not merely wait for others to finish their point just so you can begin speaking again. Use physical indications of your attention in order to demonstrate as clearly as possible to other delegates (and the chair, who should be walking around and watching the unmoderated caucus play out) that you care about what others say: nod, rely on affirmative facial expressions, and smile. Being a friendly delegate will make you a natural leader.

When it is your chance to speak, do not simply explain your same ideas again and again. Instead, engage with points made by others. Ask clarifying questions, pose broader questions of agree/disagree to the bloc to gage the general opinion base, and be sure to make points that are directly relevant to the one before; that is, be conversational.

The natural tendency during unmoderated caucuses is to gravitate towards the largest bloc in the room. Productive discussion, however, is hardly possible when there are 25+ delegates simultaneously attempting desperately to get their point in and their voice heard. With blocs of this magnitude, delegates on the periphery will inevitably get left out.

For that reason, avoiding enormous blocs is often times in your best interest.

You will be able to discuss and connect with more delegates without the added burden of competing for airtime; thus, your 15 minutes will be much more fruitful.

So, the unmoderated caucus comes to a close as the chair calls everyone back to their seats. During the moderated caucus that usually follows, the best use of your time–that is, when not delivering a speech–is to write notes to the delegates you worked with during the unmoderated caucus. Follow up with them to make sure that you sustain the working relationship, because open and constant communication is absoltely paramount, particularly when blocs have not yet been solidified. If you fail to follow up with a delegate you discussed with during the unmod, they might end up drifting away from the bloc and joining another.

Conversations almost always get cut short by the end of the unmod; so, continue that conversation via passing notes, and progress will not be lost.

Much of the cutthroat behavior which is notoriously seen at competitive, college-run conferences happens during unmoderated caucuses, because of the lack of supervision. As such, the best way to establish yourself as a leader is to ascend above that pettiness, and work honestly with other delegates. Listen to others, ask questions, stay a way from enormous clusters of screaming delegates, and focus on classic conversationalist skills; the leadership recognition that follows will come naturally.